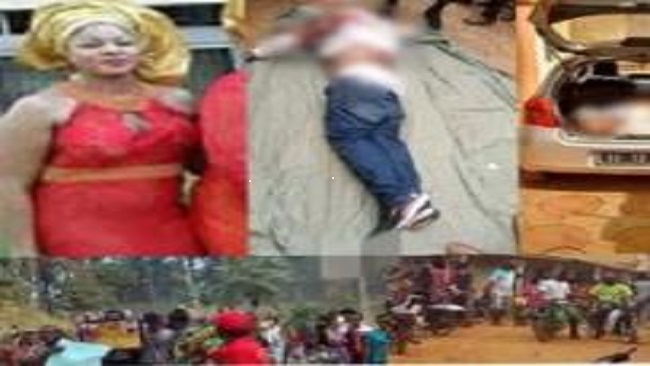 Cameroon-based Nigerian man identified as Ugochukwu Okeke a.k.a Alino, has allegedly been killed by his wife, Chinenye Adaeze Okeke, and her apprentice boyfriend in the  African  country.

Multiple online reports reveal that  the deceased  met his untimely death during an argument with his wife over her sexual affairs with one of his apprentices under his roof. Late Alino hailed from Ndimgbu while the wife is from Mbanagu, both in Anambra State.

It was gathered that Chinenye and the said boyfriend joined hands to beat Alino to death. They then wrapped his body and put it in a car trunk for disposal, but luck ran against them and they were apprehended.

The suspects are now cooling their feet in a police station in Yaunde.

Alino was the only son of his mother popularly known as Madam Holy Holy. The couple had 5 children together.

On Saturday, Nnewi Youth in their numbers stormed  the home  of the wife in Mabanagu to burn down her father’s house. The angry youths ransacked the house and took the  pictures  of Chinenye and  mourn  her alive around the town.