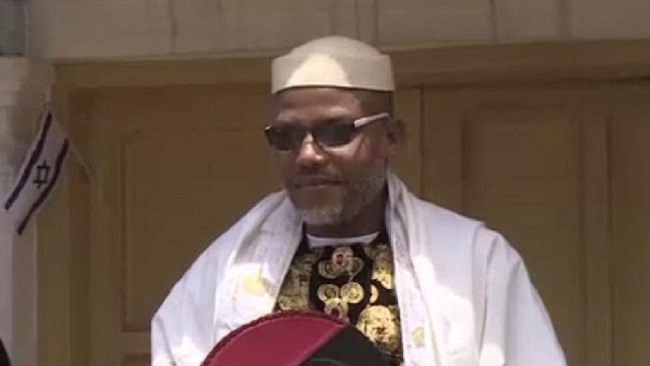 Police in Nigeria’s Southeastern Abia State have reiterated that they do not know the whereabouts of pro-Biafra leader, Nnamdi Kanu.

Commissioner of Police Anthony Ogbizi told the local Punch news portal that as far as they were concerned Kanu has a case before court. That he had been granted bail with three sureties, those persons according to Ogbizi were best placed to tell where Kanu was.

“Nnamdi Kanu was charged to court; he still has a case in court. He was granted bail by the court, but we heard that he jumped bail.

“The sureties, who secured the bail conditions for Nnamdi Kanu, should tell us his whereabouts,” he stressed.

An Abuja Federal High Court granted Kanu bail in April 2017 after over a year in detention on treason charges. He, however, went missing after members of his group, the Indigenous People of Biafra (IPOB) clashed with the army at his family home in September 2017.

The army insists it is not holding him and the government has since secured a court order proscribing the group. Kanu failed to show up at the last hearing date for his trial. The trial judge has since ordered his lawyer to produce him at the next sitting on March 28.

Kanu is leading a secession movement pushing for the independent state of Biafra. The earlier push for a separate republic of Biafra was championed by Chief Ojukwu nearly 50 years ago.

The declaration of independence sparked a civil war which left more than a million people dead. President Buhari has previously said the unity of Nigeria was non-negotiable.