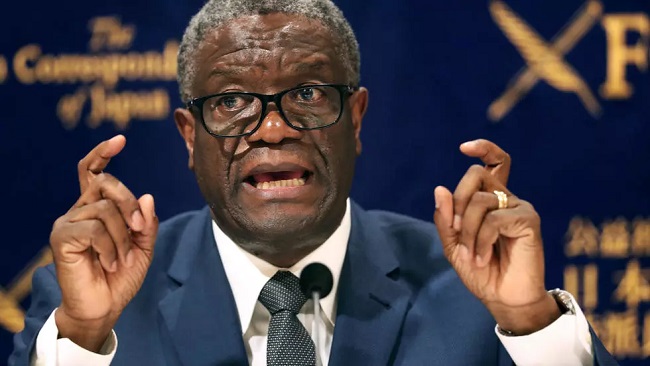 Nobel winner Denis Mukwege on Wednesday said he had resigned as head of a coronavirus taskforce in an eastern province of DR Congo, blaming organisational problems, outpaced strategy and slow testing.

Mukwege, a DR Congo gynaecologist who shared the Nobel Peace Prize in 2018 for his work against sexual violence in war, was appointed on March 30 to lead a committee in South Kivu province.

Panzi Hospital, where Mukwege treats abused women, is also located in the province.

In a statement, he said there had been “weaknesses in organisation and clarity between the various teams in charge of the response to the pandemic in South Kivu.”

“We are at the start of an exponential… curve (in infections) and we can no longer apply a strategy that would be purely preventive,” Mukwege said.

“I have decided to resign… in order to devote myself entirely to my medical duties and to treat the influx of patients at Panzi hospital.”

He said he regretted that it took “more than two weeks” to get coronavirus test results from the national reference lab in Kinshasa — “a major handicap for our strategy based on ‘testing, identifying, isolating and treating’.”

Mukwege also criticised developments that he said had “reduced the effectiveness” of the anti-virus campaign.

They included a relaxation in vigilance by the public, hurdles in enforcing distancing and the return of thousands of people from neighbouring countries without quarantine.

Mukwege had pleaded in mid-April for partial confinement of people over the age of 60 and compulsory mask-wearing for everyone to help break the chain of virus transmission.

On May 9, he called for “emergency supplies” of tests “before the exponential curve (of infections) gets underway.”

The Democratic Republic of Congo has declared 4,390 infections, including 3,980 in Kinshasa and 89 in South Kivu and a total of 96 deaths.