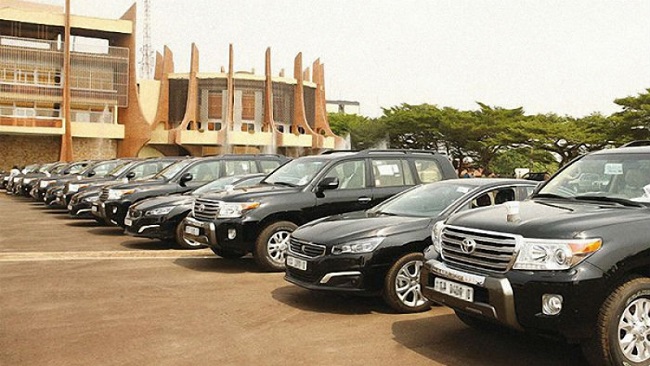 The man responsible for running a prosperous nation to the ground is indeed a blessing to his people and Cameroonians are lucky to have him as their head of state. State radio and television says he indeed a Jesus Christ.

Recently, the Biya Francophone Beti Ewondo regime announced its expenditure on cars which is expected to be made this 2021 in thirty administrative departments.

In spite of the difficult economic situation in the two Cameroons, the Biya administration that only cares about the French Cameroun Kaiser, his acolytes and represents falsehood intends to increase its car fleet in 2021.

Cameroon Concord News Group understands that for the current year, the consortium of crime syndicates in Yaoundé will be spending the sum of FCFA 5,343,285,000 in car purchases.

In French speaking Cameroun, it is business as usual despite pressure from the European Union, and more recently the Vatican for the 88 year-old Biya to reconcile the country and make peace with the people of Southern Cameroons-Ambazonia.

The Francophone dominated government is still in favour of a military response to the crisis in Southern Cameroons and nobody not even the Holy Father Pope Francis has succeeded to talk President Biya out of the madness and cruelty he has brought to a once prosperous nation.

Buying of expensive cars and handing them to senior regime officials both in government and in the military  and above all, having superior military power, will still not put an end to the Ambazonia resistance because the determination of eight million Southern Cameroonians will surely keep the military in the jungles of Southern Cameroons for a very long time.