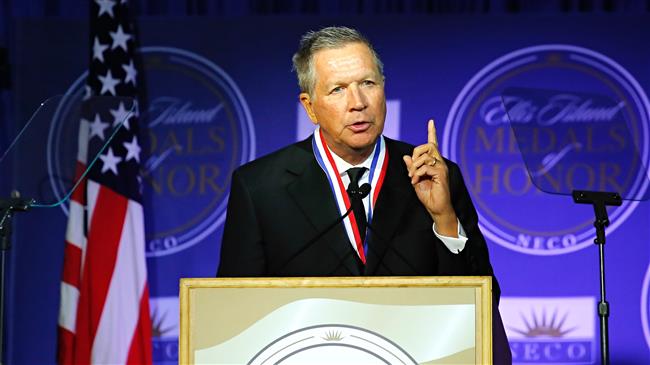 The Governor of the US state of Ohio John Kasich says the two-party system that has dominated US politics for over a century might be nearing its end.

“We may be beginning to see the end of a two-party system,” Kasich, a Republican, told ABC News on Sunday. “I’m starting to really wonder if we are going to see a multiparty system at some point in the future in this country because I don’t think either party is answering people’s deepest concerns and needs.”

The governor, who ran a failed bid Donald Trump in the 2016 presidential primaries, said the Republican Party was his “vehicle” and not his “master.”

However, asked would he run as an independent if he was to mount another White House bid, the 65-year-old said he would not because he was still a Republican.

He is rumored to be preparing for a possible 2020 bipartisan bid with Colorado’s Democratic governor, John Hickenlooper, as his running mate.

Kasich has been a firm critic of Trump ever since he launched his presidential campaign and defeated all Republican and Democratic candidates to become president.

He did not have high hopes for his own party in 2018, the year both Republicans and Democrats face the fateful mid-term congressional elections.

The governor predicted that Democrats were going to have a better year overall despite lacking a clear agenda.

It was this lack of agenda on both sides that could ultimately lead to a collapse of the two-party system, he further argued.

The Republican and Democratic Parties are able to take turns electing US presidents and controlling Congress because the American political system discourages people from supporting third parties, such as the Greens and Libertarians.

Third party candidates face major challenges in the United States, such as the failure to meet the criteria for ballot access. Due to debate access rules, they are even often excluded from participating in presidential debates.

According to political observers, the two major US political parties are heavily influenced by corporate money and the financial markets and lack the power to implement meaningful reforms in the country.