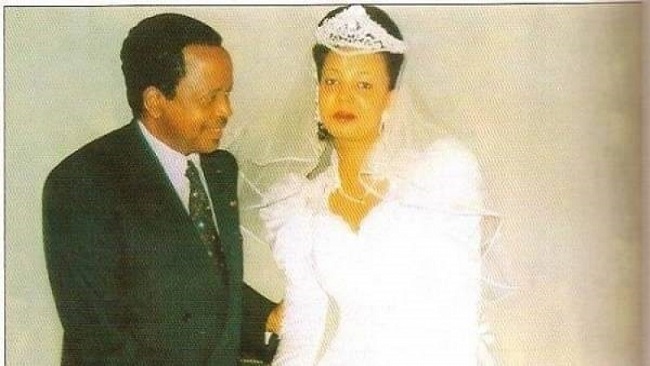 April 23rd is the wedding anniversary of the marriage between the French Cameroun monarch Paul Biya and First Lady Chantal Biya.

The 23rd of April 2020 is a special day for the failed leader and his wife. It marks the 26th anniversary of their marriage. To be sure, it was on April 23rd, 1994 that the butcher of Yaoundé surprised Cameroonians with news of Chantal Pulchérie Vigouroux as first lady.

The young Chantal Pulchérie Vigouroux, then 23 years old, said yes to Mr. Paul Biya who at that time was 38 years older than her.

The head of the ruling CPDM crime syndicate was thus experiencing his second marriage after the controversial disappearance of his first wife, Jeanne Irène, who died on the 29th of July 1992.

Chantal Biya, the young bride became the third First Lady of Cameroon after Germaine Ahidjo and Jeanne Irène. The couples who actually reside in Geneva, Switzerland have come a long way since then, giving birth to Junior Biya and Anastasie Brenda Eyanga Biya.

The 26th anniversary of their union comes in a context of containment imposed by the coronavirus pandemic- a health crisis that has already impacted some wasteful celebrations at Mvomeka’a.