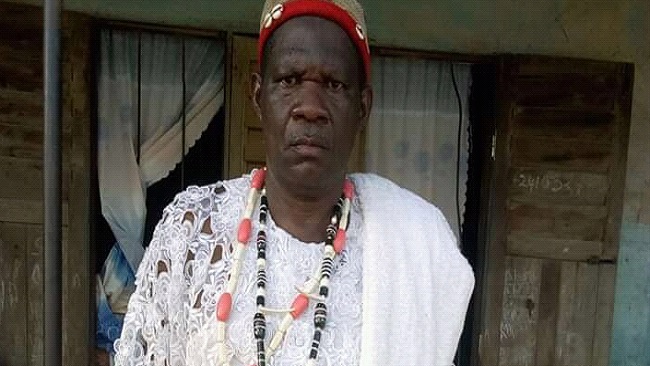 Ossing Massacre: Ambazonia Restoration forces on the trail of the killers 0

Pressure is mounting on the killers of the Ossing regent chief who was killed last month, as genuine Southern Cameroons restoration forces have jumped into the fray to track down the criminals who are taking advantage of the chaos reigning in the two English-speaking regions of the country. Restoration forces have vowed to root out these rogue elements who have given them a bad name and who have nothing to do with the fighting on the ground.

Citizens of Ossing had identified the killers whose motives are still unclear. However, a video produced and released by the rogues has confirmed that they were indeed from Kembong, a town some 4 km from Ossing. The video is also helping government law enforcement agencies who have vowed to bring the killers to book in their investigations.

The misguided and rogue elements accuse the regent chief of collaborating with the Yaounde government in its fight against secessionists, but this version has been discounted by people who were close to the regent chief. As a chief or his representative, the regent was automatically supposed to be answerable to the senior divisional officer and he had the responsibility of answering any questions on the city of Ossing and its residents. Basing their faulty and unreasonable logic on that, the rogues killed a man who had nothing to do with the rebellion that is still playing out in the two English-speaking regions of the country.

According to experts who have analyzed the video released by the killers, the plan was not to kill the regent chief, but after having driven some bullets into his leg which led to heavy bleeding, the defenseless regent chief was left to die in his own pool of blood.  The video, which has gone viral, underscores the need to root out those violent elements that are gradually killing the rebellion with their atrocities which are making the Yaoundé government look like a saint.

For some time now, rogue elements taking advantage of the ugly situation in the two English-speaking regions have been milking the population, sometimes asking villagers to contribute to the war efforts with money they do not have. This is something genuine restoration forces never do. These rogue elements have been kidnapping innocent citizens and they have been asking for ransom and the amounts are indeed mind-blowing.

According to restoration forces who have contacted the Cameroon Concord News Group, the Ossing massacre is one situation that is hurting their credibility and they are determined to demonstrate that they do not have anything to do with this heinous crime. They have also indicated that penalties for such crimes will be stiff and anybody who is directly or indirectly involved will have to face the wrath of the law.

Investigations are currently underway and both the country’s law enforcement agents and restoration forces are on the trail of the fake fighters who committed the abominable and irreversible act. As both groups turn the heat on the killers, more stories are gradually emerging and it is becoming obvious that the trail might have started in Kembong, but it will end in Ossing as it is suspected that the masterminds are those who disagreed with the regent chief.