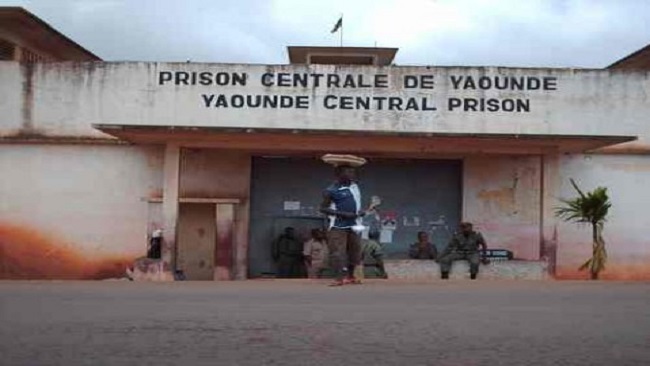 The Biya Francophone regime authorities are reportedly keeping more than 1,700 Ambazonian activists behind bars as part of a widening crackdown led by the 85 year-old French Cameroun dictator against the English speaking minority, Anglophone journalists and intellectuals.

Pictures of Dzenyagha Thomas Awah Junior and several Southern Cameroons detainees in their Kondengui cell emerged over the weekend showing the Anglophone journalist and a cream of other Ambazonian intellectuals in a dire condition which has provoked widespread condemnation.

Our chief political correspondent in Yaoundé who was at the Kondengui High Security Prison yesterday reported that at least 1,700 Southern Cameroonians, among them prominent lawyers and academicians are currently languishing in jails and detention centers across French Cameroun.

Journalist Dzenyagha Thomas Awah, Publisher of the Aghem Voice was slammed an 11-year jail term for secession, amongst other charges on May 25, 2018 and is being held in prison since January 2017.

President Biya declared war against the people of Southern Cameroons following scenes of peaceful demonstrations that was led by lawyers and teachers. Ambazonian protesters have been demanding reforms and an end to economic discrimination.

The International Crisis Group including renowned human rights organization such as Amnesty International have blasted the Yaoundé regime for imprisoning the Acting President of the Southern Cameroons nation, Sisiku Ayuk Julius Tabe including 46 members of the Ambazonian Interim Government  calling for his immediate release. Southern Cameroons protests have been met with a heavy-handed crackdown by the Biya regime, with Francophone troops beefing up security measures across the entire Southern Cameroons territory.

Over the past years, the Biya Francophone Beti Ewondo regime has also redefined its anti-terrorism laws to target activism in the Far North region staged by supporters of the detained former Minister of Territorial Administration, Marafa Hamidou Yaya and Southern Cameroons separatists.