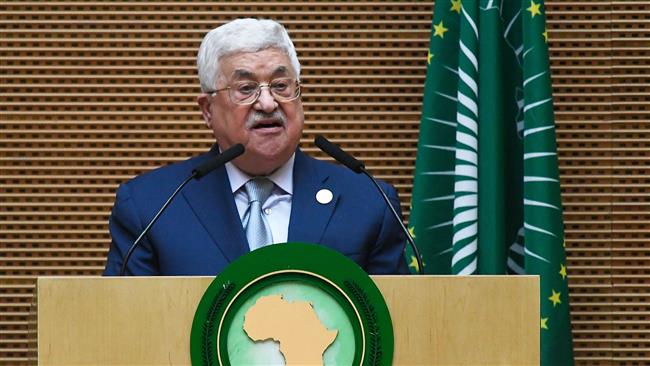 Palestinians will halt all agreements with Israel, says Abbas 0

Palestinian president Mahmud Abbas said Thursday he has decided to stop implementing all agreements with Israel. The declaration came a day after the US blocked a UN attempt to rebuke Israel over Palestinian home demolitions.

“We announce the leadership’s decision to stop implementing the agreements signed with the Israeli side,” Abbas said in a speech in the West Bank city of Ramallah.

Abbas had previously not spoken so clearly and definitively of a break in cooperation, although Palestinian officials have in the past made threats to stop implementing all accords with Israel.

He said the Palestinians would immediately form a committee to study how to carry out the decision.

The two governments work together on matters ranging from water to security, and withdrawing from agreements could impact security in the occupied West Bank.

Abbas, 84, has made similar threats before and not implemented them.

The Palestinian leader’s announcement came a day after the US blocked a move by Kuwait, Indonesia and South Africa to get the UN Security Council to condemn Israel’s demolition of Palestinian homes on the outskirts of Jerusalem

The residential structures were located close to Israel’s separation barrier which cuts off the occupied West Bank. Israel says they were built too close to the wall, which the Jewish state considers vital for its security.

UN officials, who had called on Israel to halt the demolition plans, said 17 Palestinians faced displacement.

Kuwait, Indonesia and South Africa circulated a five-paragraph draft statement, according to diplomats, to the 15-member Security Council on Tuesday that expressed grave concern and warned that the demolition “undermines the viability of the two-state solution and the prospect for just and lasting peace”.

Such statements have to be agreed by consensus and on Wednesday the US told its council counterparts it could not support the text, diplomats said.

A revised three paragraph draft statement was then circulated, but the US again said it did not agree with the text, diplomats said.

Washington has long accused the UN of anti-Israel bias and shields its ally from council action.

US President Donald Trump’s Middle East envoy Jason Greenblatt and Trump’s son-in-law-cum-adviser Jared Kushner have spent two years developing a peace plan they hope will provide a framework for renewed talks between Israel and the Palestinians.

Greenblatt told the Security Council on Tuesday a peace plan cannot rely on global consensus, inconclusive international law and “unclear” UN resolutions, sparking pushback from several countries. He said a decision on the release of the political component of the US plan would be made “soon”.

But relations between Abbas’s government, based in the West Bank, and its Israeli counterpart have worsened in recent months.

In February, the Jewish state decided to deduct around $10 million a month from tax revenues it collects on behalf of the Palestinians, corresponding to the amount it said the Palestinian Authority pays to families of prisoners or directly to inmates in Israeli jails.

Israel sees such payments as encouraging attacks while Palestinians see them as support for families who have often lost their main breadwinner.

The Palestinians have in response refused to take any of the roughly $180 million in monthly tax revenues until the full amount is transferred, leaving Abbas’s PA in financial crisis.