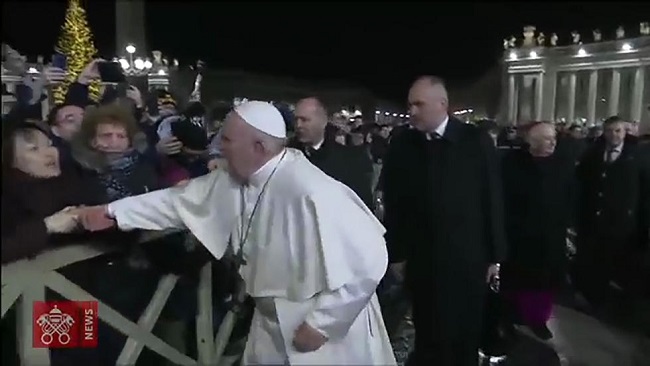 Pope Francis’s attempt to wrest himself from the grasp of an ardent follower this week have left some asking — where was the pontiff’s security detail?

Often dubbed the “People’s Pope,” Francis’s ability to engage with crowds — and his apparent relish in doing so — puts him in close proximity with the throngs who gather to greet him.

Whether taking selfies with the faithful, shaking hands, or blessing children, the head of 1.3 billion Catholics around the world is protected by bodyguards from a special corps charged with the pope’s security.

But on New Year’s Eve in Saint Peter’s Square, televised images showed a woman behind a barricade grabbing Francis’s hand, while three men in black can be seen in the background.

The Pope swats at the woman’s hand to free himself, before one of the men is seen restraining her hands. Francis later apologised for setting a “bad example.”

By Thursday, after the images circulated online, some people took to Twitter to question how the incident could have happened.

“The guy has a literal army to protect him and has to do his own slapping?” asked one Twitter user.

Another commented: “The Pope has a very lax security detail.”

One security expert however said bodyguards should have intervened earlier.

“It’s the Pope’s security team who should be apologising,” said the founder of Italy’s elite special police interventions unit, whose identity is protected but who goes by the name Commandant Alfa.

“The lady wouldn’t let go of the Pope’s hand, and he was forced to slap her hand a little bit in order to get out of the way,” Alfa told the AGI news agency. “But it shouldn’t have gotten to that point.”

The pope’s chief bodyguard and head of Vatican security, Domenico Giani, resigned in October after an internal security memo related to a Vatican financial probe was leaked to the press.

Papal security became a top priority at the Vatican after the 1981 assassination attempt of pope Jean Paul II by Mehmet Ali Agca, a Turk, in Saint Peter’s Square. Heightened security measures that followed included making the Popemobile bulletproof and the addition of metal detectors on entering the square.

But even overly enthusiastic fans have posed security risks. In 2009, before a Christmas Eve Mass given by then pope Benedict XVI, a woman who later said she wanted to give the pontiff a hug jumped over a barricade and grabbed his robes, pulling the 82-year-old to the ground. Benedict was not injured but a French cardinal broke his leg in the melee.

When Francis became pope in 2013, his low-key style and desire to bring the Roman Catholic Church closer to the people posed new headaches for the Vatican’s elaborate security team, whose colourful Swiss Guards are the most visible members.

“You have to respect the personal style of each pope,” said Francis’s spokesman at the time, Federico Lombardi.

“It’s not for the heads of security to decide these things.”