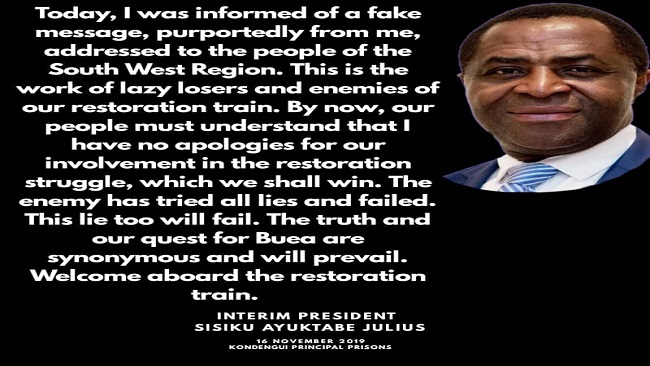 Ambazonia President Sisiku Ayuk Tabe has reacted to a fake message issued by the French Cameroun regime and its Southern Cameroons acolytes to the people of the Southern Zone of the Federal Republic of Ambazonia saying it is the work of lazy losers and enemies of the restoration train.

The Southern Cameroons leader furthered that “By now, our people must understand that I have no apologies for our involvement in the restoration struggle which we shall win.”

President Sisiku Ayuk Tabe also observed that “The enemy has tried all lies and failed. This lie too will fail. The truth and our quest for Buea are synonymous and will prevail.”

Reading from the same script with the leader, Vice President Dabney Yerima has been quoted as saying that French Cameroun troops occupying Ambazonia will face armed resistance that will force them to leave the country.

The Southern Cameroons exiled second-in-command hinted that the Amba Bonds Project will provide the necessary financial resources needed to counter French Cameroun violence with violence. “French Cameroun continued presence in the Ambazonia territory is generating an armed resistance which is exacting losses among the French Cameroun army, and will consequently force them to leave,” said Dabney Yerima on Friday.

Making reference to an audio message aired recently calling on Ambazonia Restoration Forces to kidnap Southern Cameroonians going home for Christmas, Vice President Dabney Yerima appealed to the Southern Cameroons Self Defense Forces to work according to directives from the Ambazonia Interim Government and not indulged into actions that will tarnish their hard earned reputation.

Analysts speaking to Cameroon Concord News Group publications have hinted that the parliamentary and municipal elections called by French Cameroun’s leader Paul Biya may be seeking to test the will of the Ambazonia Interim Government. The Yaoundé regime has also propped up armed militias to create strife and gain foothold in Southern Cameroons.

Comrade Dabney Yerima made it abundantly clear during last week’s cabinet briefing that the French Cameroun occupying forces cannot occupy a piece of land in the Federal Republic of Ambazonia without having agents in the territory because it would be difficult for them to live in a completely hostile environment.

Vice President Dabney Yerima explained that the activities of some Southern Cameroons so-called front line leaders and groups have provided the French Cameroun regime an excuse to continue to massacre Southern Cameroonians.

“There is an urgent need for Southern Cameroonians both in the diaspora and in Ground Zero to move away from there too many dissident Amba groups because they provide the Biya Francophone government with the pretext to implement their plan, which was handed to them by the French government in 1961 in Foumban” Dabney Yerima said.

“We shall never accept any special status propositions under any circumstances,” Vice President Yerima concluded.