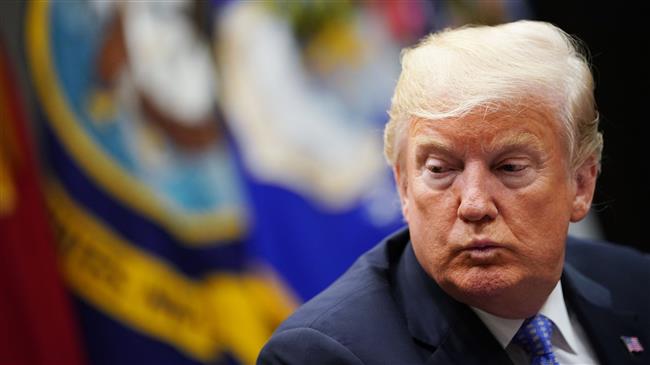 Pressure increases on Trump as impeachment gets closer 0

US President Donald Trump is feeling the political heat after two of his associates were indicted in federal criminal investigations, with a growing number of congressmen calling for his impeachment.

Pressure is mounting on Trump in the wake of his former attorney Michael Cohen’s plea deal and a guilty verdict for his former campaign manager Paul Manafort.

Congressman Eric Swalwell, a Democrat from California, said on Friday that the now-shuttered Russia investigation conducted by the House Intelligence Committee was a “sham” and needed to be reopened.

Asked whether he believed Cohen lied to his committee last year when the president’s former longtime attorney testified on allegations of Russian collusion during a six-hour session, Swalwell said only that Cohen had appeared to not have been “forthcoming.”

“[But] the only way to really test that is if he comes back [and testifies],” Swalwell added.

Swalwell’s remarks come days after the Senate Intelligence Committee stated that it wanted Cohen to reappear before the committee to testify.

Political observers say the current political trend shows that after the “countdown” for impeachment began, matters are spiraling out of Trump’s control, forcing him to either face the impeachment or resign.

In his first public acknowledgment of a possible impeachment, Trump claimed he was doing a great job, so he would not be impeached.

Why would Congress impeach “somebody who has done a great job,” Trump told Fox News on Thursday commenting about his impeachment.

“If I ever got impeached, I think the market would crash. I think everybody would be very poor,” he warned the people of the US.

Trump claimed that if he were to be impeached, the US economy would crash and the stock market would plunge to “numbers that you wouldn’t believe, in reverse.”

Meanwhile, on Capitol Hill efforts are underway to impeach Trump as soon as possible.

“The president has to realize that the countdown to impeachment has already started,” said congressman Al Green from Texas in a interview this week.

“He, at some point, will have to choose if he will face impeachment or if he will resign. It will be his choice. The congress will have no choice but to act,” the Democratic lawmaker pointed out.

Other congressmen made similar remarks.

“The president of the United States is now directly implicated in a criminal conspiracy, numerous members of both his campaign and administration have been convicted, pleaded guilty to felonies, or are ensnared in corruption investigations, and the Judiciary Committee has real work to do,” said New York congressman Jerry Nadler.

“If something comes out that is clear and convincing and impeachable, I think members will act,” said Tom Cole, a Republican member of the US House of Representatives.

In his Thursday interview with Fox News, Trump criticized his former lawyer Cohen for “flipping” amid pressure.

Trump suggested that anyone deciding to cooperate with the government by giving information about criminal cases to receive a reduced sentence from court is making up “stories” and “lies.”

The president said such practices should be banned. “It’s called flipping and it almost ought to be illegal,” he said.