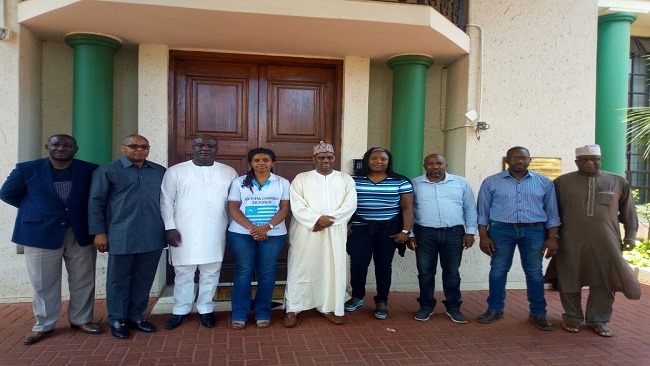 Pretoria: Ambazonia ambassador to South Africa says ‘You can change friends, not neighbours’ 0

The ambassador of the Federal Republic of Ambazonia to the Republic of South Africa, Ms Jessy Itambi has handed over a strongly worded petition to the Nigerian Consulate in Pretoria on the arrest of President Ayuk Tabe including nine of his aides in Abuja.  Her Excellency Jessy Itambi who also moonlights as Ambazonia’s diplomatic representative to the SADC countries led a massive demonstration attended by hundreds of Ambazonians in South Africa.

Cameroon Concord News Bloemfontein reporter said the move taken by Ambassador Jessy Itambi is keeping with directives from the Interim Government that called on all Ambazonians in Pretoria and around the world to stage peaceful protest in front of all Nigeria foreign missions.

Ambassador Itambi further called on the Buhari administration to respect the rule of law and release the Ambazonian leadership.  The chief diplomat in South Africa pointed out that by not granting President Ayuk Tabe access to lawyers hired by the Interim Government, the Nigerian State Security Service (SSS) was in violation of Section 6 of the Administration of Criminal Justice Act of the Federal Republic of Nigeria.

On a lighter note, Ambassador Itambi was full of praise for the people of Nigeria and their government for helping to take care of the more than 50000 Ambazonian refugees in Nigeria. She was also grateful to the Nigerian High Commissioner to South Africa HE A.I. Musa for receiving the memo informing him that “Nigeria can change friends but cannot change its neighbours.”  The Pretoria event was attended by Ambazonia’s Under Secretary for Communications, Hon. Milton Taka.