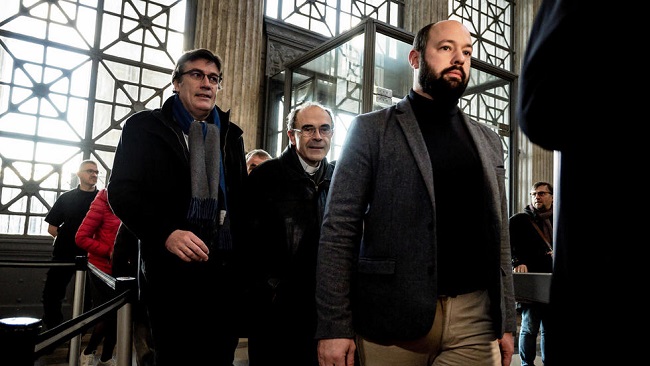 A French prosecutor asked an appeals court on Friday to quash Cardinal Philippe Barbarin’s conviction for failing to report sex abuse by a priest, eight months after a verdict that rocked the French Catholic Church.

Barbarin, the archbishop of Lyon, was given a six-month suspended jail sentence in March for failing to report allegations that a priest in his diocese abused dozens of boy scouts in the Lyon area in the 1980s and 1990s.

Barbarin, 69, has denied the charges, but tended his resignation to Pope Francis, which the pontiff rejected pending the outcome of his appeal.

The cardinal, who has nonetheless stepped back from his duties, is the most senior French cleric to be caught up in a global clerical paedophilia scandal, which has seen clergy members hauled before courts from Argentina to Australia.

Public prosecutor Joel Sollier warned against a “symbolic” conviction, saying the cardinal could not be held accountable for the “mistakes” of the Catholic Church, which was slow to admit to the long-running cover-up of abuse allegations.

After the hearing, Barbarin said he was “relieved” by the prosecution’s recommendations.

“I put myself at the mercy of the court,” he said.

At his initial trial the prosecution had also called for him to be cleared of the charges, but the court still convicted him.

The judges on that occasion found him guilty of twice failing to report Bernard Preynat to the police, first in 2010 when the priest admitted to the cardinal that he had a history of abuse, and again in 2014, when one of Preynat’s alleged victims informed Barbarin about the abuse he suffered.

But Sollier argued that it was “difficult to consider that Cardinal Barbarin had the desire to obstruct justice or the awareness of doing so.”

Barbarin, a deeply conservative priest who took over as archbishop in Lyon in 2002, has long been accused by victims’ groups in Lyon of turning a blind eye to the historic child abuse in his diocese which blighted dozens of lives.

Investigators had initially dropped the case against him in 2016 after concluding that the allegations were either too old or impossible to prove.

But a group of victims succeeded in having the probe reopened, which led to Barbarin being ordered to stand trial.

He insisted at the trial earlier this year that he had “never tried to hide, let alone cover up, these horrible facts”.

But the court ruled that he chose not to tell the authorities of the abuse allegations “in order to preserve the institution to which he belongs”.

Preynat, who was defrocked in July, is himself set to go on trial in January.

Two other senior French religious figures have been convicted of failing to report child abuse in the past: the archbishop of Bayeux-Lisieux, Pierre Rican, in 2001, and the former bishop of Orleans, Andre Fort, last year.

The court said Friday that it would issue its ruling on January 30.