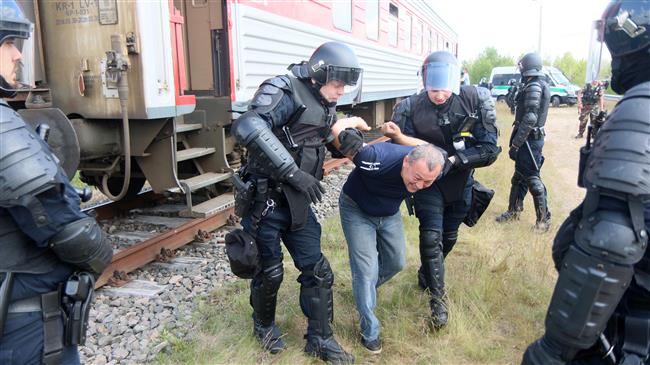 Authorities in Finland and Belarus, which share border with 2018 World Cup host Russia, say refugees are using Fan IDs issued for visits to the country during the tournament to try to enter the European Union.

Andrey Sytenkov, an investigator with Belarus’s State Border Committee, said Wednesday that a small number of foreigners had been arrested while trying to enter the country or trying to cross the border with EU members Lithuania and Poland under the guise of football fans.

Sytenkov said four Moroccans had been stopped while transiting Belarus, adding that they were in temporary detention and faced fines, deportation and a five-year ban on entering the country. He said an unspecified number of Pakistanis were also detected by authorities as they tried to enter the EU illegally. The official did not elaborate on the whereabouts of the Pakistani nationals.

“More ‘illegals’ have entered Belarus under the guise of football fans … We are ready for the fact that Europe will not accept them and will be sending them back,” said Sytenkov during a press conference in Minsk, adding that the Belarusian border guard service “has information on groups of pseudo-fans” on the country’s western borders.

A Fan ID is a document that all the spectators of 2018 FIFA World Cup matches must have to get access to stadiums.

Finish authorities also pointed to three cases of people holding the Russia-issued Fan IDs who had crossed the Russian-Finnish border.

“They will not be deported to Russia immediately,” Border Guard official Marko Saareks said of the people who had requested asylum in Finland.

Saareks warned that more refugees could enter Finland using the Fan IDs until the end of the World Cup on July 15.

“There is a threat of this kind of phenomenon,” said the official.

Russia introduced the Fan ID system to ease its strict visa rules during the World Cup so that supporters of teams participating in the tournament could easily travel between Russian cities.

However, the Russian police have used the system as an additional security measure by conducting background checks with the help of their foreign counterparts. Authorities said ahead of the world Cup, which started on June 14, that Fan IDs were not issued for some 500 people.