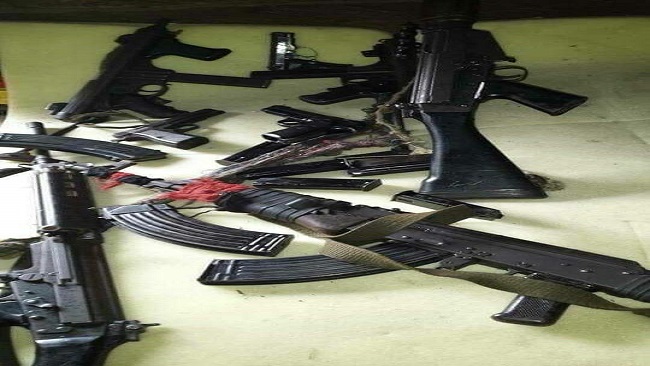 Cameroon’s restive English-speaking regions are emptying out after renewed military raids on separatist strongholds left at least 30 people dead in two days. The renewed fighting comes barely a week after President Paul Biya, during his inauguration ceremony, warned rebels to drop their guns or be killed. Thousands of fleeing civilians are arriving in Yaounde.

Nso and Wimbum people, from the English-speaking northwest region of Cameroon, sing and dance to welcome some of the thousands of people who fled fighting in their villages.

Nineteen-year-old businessman Kenneth Kongyu says he fled in a group of 75 as the military clashed with Anglophone separatists who want to form an independent state they call “Ambazonia.”

“So when we arrived in Berr, we saw about 300 people there. They were even asking me, where am I going let them join me? I said I am just going to nowhere,” he said. “I am afraid, they are killing people every day, both the Ambazonia fighters and the military. When they come to the market, they shoot from every angle.”

Cameroon’s military spokesperson Colonel Didier Badjeck on Wednesday said the death toll from clashes the last few days had increased to more than 30, all of them separatists.

Seventeen-year-old Oscar Tatah says he is a former separatist fighter. He says he was nearly killed when the military attacked their training camp of 80 young fighters in Nkambe.

“Some are joining because they have killed their family members, their father, maybe their mother or their father or their brothers. So, they don’t have somebody to count on again. That is the reason why some are joining. I am pleading on the government to try and solve the problem so that we, the youths, we can go back to school,” said Tatah.

“People need to continuously cluster together, sensitizing each person or each member of each group or community to do the right thing and doing the right thing is to respect the law and follow the norms. They should avoid being exposed to circumstances. They should be law-abiding,” he said.

During his inauguration on November 6, President Paul Biya told fighters to drop their guns or be killed. He promised to pardon those who stopped fighting.

Political analyst Gabriel Suh says the rebels are showing no signs of surrendering. He says Cameroon may be in for carnage if Biya does not negotiate with the separatists, whose leaders live in exile.

“Why can the government not invite those in the diaspora to come to the negotiating table where there is no intimidation? They can talk one to one, ask them what they need, what they want and what they do not want. We should dialogue amicably,” said Suh.

Some political leaders have called on Biya to initiate dialogue with the separatists. But Biya — who has ruled Cameroon for 36 years — has refused any talks on Cameroon becoming a divided state.

Cameroon, a former French colony, has been troubled by unrest since separatists in two English-speaking regions in 2016 said they wished to form a new country.

Biya declared war on them, calling them terrorists for attacks that killed government troops.

In January, Cameroon extradited from Nigeria the self-proclaimed leader of Ambazonia, Ayuk Tabe Julius, along with 47 of his supporters.

Since then, separatists have been attacking schools, killing and kidnapping teachers, students, and workers to make the English-speaking regions ungovernable.