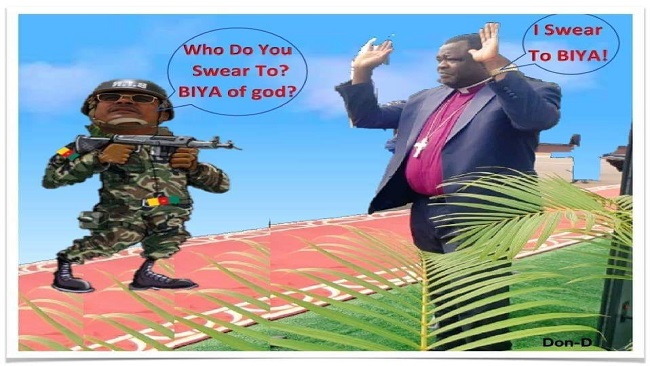 Rev.Fonki is a good example to demonstrate that practice does not make perfect 0

The political class has failed Cameroon and it is presently driving the divided nation closer to a failed state. The church has contributed enormously to this failure and the chaotic situation that has rocked Cameroon is made worse by the Christian community leaders who are now acting like agents of the CPDM crime syndicate.

The case of the Moderator of the Presbyterian Church in Cameroon, Rev Fonki Samuel is very glaring and many including the Cameroon Concord News Group are of the opinion that it is time the PCC looks for a decent man to run its spiritual affairs.

Under Rev. Fonki Samuel, Presbyterian Christians have grown cold in their prayer lives and the power of a praying church that was the motto of the PCC is now a thing of the past. The choice of this editorial has been informed by the observable trend of cold and insincere prayer attitude that characterised the Presbyterian community in particular and the entire Christian fold in Southern Cameroons; the reason why the situation of Cameroon has not possessed the wishes of God for his people.

The heart of the PCC which is the Bastos congregation in Yaounde is now operating like a commercial centre and Presbyterians there have not been praying enough because both their spiritual leader and the Moderator have compromised with the Biya regime rather than keep to their calling of being the prophetic voices of the people.

Rev Fonki Samuel and the Archbishop of Yaounde have failed Cameroon and the Christian Community and the need for fervent prayer culture to oust both men from their respective positions of trust should and must become highly important as it is a command by God, which is an acceptable link between God and his children and an avenue to demonstrate God’s power.

Rev Fonki Samuel is a good example to demonstrate that practice does not make perfect. Criticised for opening a Protestant University in Bali and at the same time sending his own kid abroad for studies, the so-called Man of God and Moderator abandoned children who were reportedly kidnapped by armed militia backed by the Minister of Territorial Administration, Paul Atanga Nji and rushed to congratulate 85 year President Biya for stealing the October 7 polls.

We of the Cameroon Concord News and the Cameroon Intelligence Report can authoritatively say that the leadership of the PCC has abandoned the role of the church which is to salvage the course of the nation through godly behaviours and Rev Fonki is behaving like a common Christian leader running a small church in a ware house near the Mamfe Motor Park.

A complete change of leadership will help the Presbyterian Church in Cameroon and its fast growing Diaspora and this can only be achieved through the cries of the righteous in prayer. It is on this note that we of the Cameroon Concord News Group are calling on the pastors of the Presbyterian Church in Cameroon and all the Rev Fathers in the Archdiocese of Yaounde to rise up to all the challenges posed by poor spiritual leadership through persistent prayers and righteous living to enable Christians wade into the appalling situations of the nation.