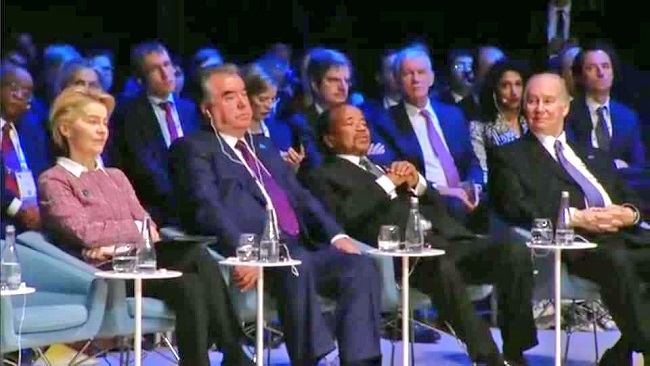 CRTV stopped a live broadcast and reportedly brought in some commercial slots to prevent its viewers from watching Biya sleeping during deliberations in Paris. Our Yaoundé city reporter contacted one of the Sub Directors of Programs at Mballa II with a photo of Biya sleeping and he responded by saying “President Biya never sleeps, he was resting while meditating and Cameroonians are very aware.”

Biya came to power in 1982 and is now one of the world’s longest serving leaders at the age of 86. French Cameroun Government spokesman declined our request to comment on the incident accusing Cameroon Concord News Group of a lack of professionalism and biased coverage.

Media watchdogs have expressed concern over dwindling freedom of expression in both Southern Cameroons and La Republique du Cameroun. The Biya regime has been shutting down independent newspapers ever since the beginning of the Southern Cameroons war that has claimed the lives of some 20,000 Ambazonians.