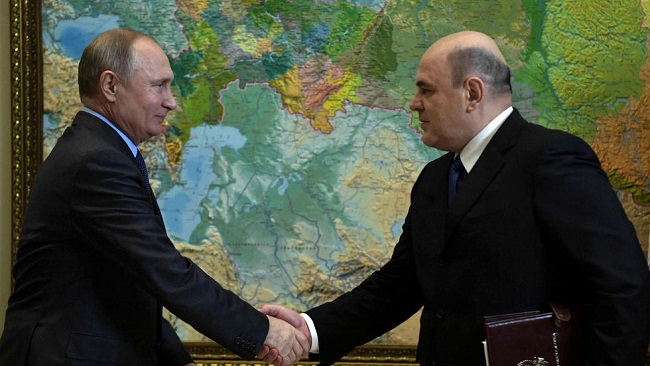 President Vladimir Putin nominated a new prime minister on Wednesday 15 January after the shock resignation of Dmitry Medvedev, who has been at the head of the government since 2012. Medvedev will be succeeded by Mikhail Mishustin, who until now was a barely known tax chief with no political clout.

After announcing a profound overhaul of Russian institutions and a reform of the constitution in his annual State of the Nation address, Putin proposed Mishustin as the new head of government, following the surprise resignation of the prime minister in office for nearly eight years, Medvedev.

Mishustin had been the head of the Russian tax service since 2010 until Medvedev’s bombshell announcement propelled him to the position of PM.

Russia’s lawmakers quickly approved Mishustin as prime minister on Thursday in a vote in the Duma, or the lower house, less than 24 hours after Putin had nominated him.

Mishustin received 383 votes of 424 cast, with no votes against and 41 abstentions in a victory that had been all but assured when he won the unanimous backing of his party, United Russia, which has a strong majority in the chamber.

Mishustin will have a week to propose a new government and ministers.

He told United Russia that some changes in the cabinet would be made but did not elaborate, lawmaker Viktor Vodolatsky told Interfax.

Mishustin, a 53-year-old Moscow civil servant who shares a passion for ice hockey with Putin, is little known by the general public.

Known as a technocrat who loves new technologies and has remained well out of the Russian political arena, his appointment has shocked some experts. “The appointment of an obscure second-rate unknown is a surprise,” reports Nick Holdsworth, FRANCE 24’s correspondent in Russia.

“Commentators had instead put forward other names, including Sergey Sobyanin, the mayor of Moscow who is known to be loyal to President Putin.”

An engineer and economist by training, Mishustin is described by Russian state media as an efficient servant of the state and the creator of the “best tax collection system in the world”, according to the Russia-24 television channel.

On the website of the Russian Presidency, the results of his service and his work are duly praised by the head of state in the reports of his annual meetings with Putin.

‘Forged in the system’

Married with three children, Mikhail Mishustin joined the Russian administration in 1998. He served as Deputy Minister of the taxation department and worked in several government agencies. He is described by political scientist Ekaterina Schulmann to AFP as “an ideologically neutral figure”.

After a two-year stint in the private sector at the head of an investment fund, UFG Asset Management, he was appointed head of the tax department in 2010 with the task of thoroughly modernising it.

A promoter of the digitisation of the Russian economy, Mishustin is behind the creation of a centralised database designed to improve the efficiency of tax collection and to be accessible to all administrations.

“This is certainly an unexpected appointment, but that doesn’t mean it will be rejected. He has a great deal of experience behind him,” said Ilyas Umakhanov, vice-president of the Council of the Federation, the upper house of parliament, before Mishustin had been approved. “He is someone who has been forged in the system.”

During his presidential terms from 2000 to 2008, Putin had already appointed officials who were unfamiliar to the public – like Mikhail Fradkov in 2004. Their key qualities included that they never sought to overshadow the Russian President.

The announcement of major constitutional reforms and the change of government announced on Wednesday are seen by analysts and opponents as an indication that Putin is now looking very seriously at his political future after the end of his last term as President in 2024.

Some suggested 67-year-old Putin, who is two years into his fourth presidential term and has steered the country since 1999, could be laying the groundwork to assume a new position or remain in a powerful behind-the-scenes role.

Independent political analyst Maria Lipman said to AFP that Putin’s announcement indicated that he wanted to “stay on as number one in the country, without any competitors”.

She said he could be deliberately weakening the presidency before relinquishing the role.

Opposition leader Alexei Navalny said on Twitter that Putin’s only goal was to “remain the sole leader for life”.