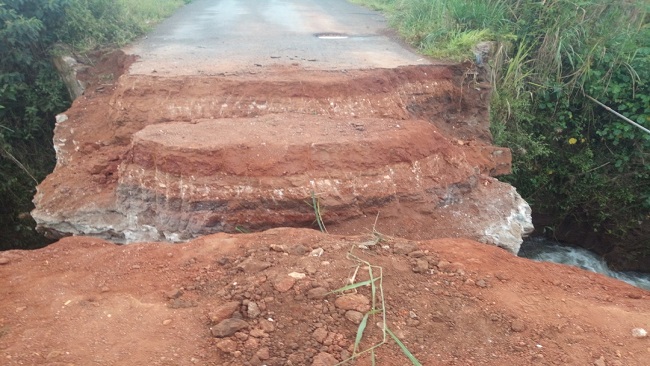 Scores of French Cameroun soldiers were killed and many others injured in an overnight attack by Ambazonian Restoration Forces in Bafut. Our chief intelligence officer in Bamenda reported that the onslaught against the Francophone government army soldiers was staged by Bafut 7 Kata Boys on Thursday.

A Cameroon government provincial security source who confirmed the news to us but sued for anonymity observed that troops loyal to the Biya Francophone regime in Yaounde were returning from the Menchum County when the convoy of 8 trucks, an armoured vehicle and a caterpillar were ambushed at Mile 24.

We gathered that fierce clashes erupted when the Southern Cameroons militants attacked the army convoy. Late night reinforcement troops arrived the area but could go across as the Bafut 7 Kata Boys had destroyed the main bridge seen here on photo attached to this report.

The soldiers attempted to repel the attack and wounded some of the attackers, but their number is not known as the militants evacuated their casualties when they withdrew from the scene.

The rugged area leading to Wum has long been a hot bed for Southern Cameroons Resistance forces despite repeated operations by the French Cameroun security forces to hunt them down. Major Key settlements in Southern Cameroons are now without administrative heads.