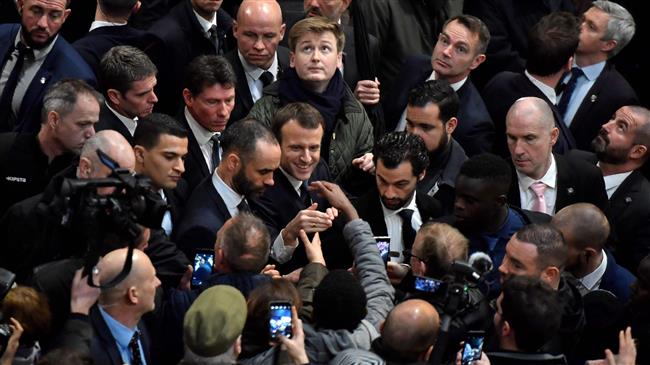 Demonstrators from vegan and animal activists group “269 Life France” demonstrated against French president Emmanuel Macron on Saturday, February 24, during his first visit as president to the country’s main agricultural fair in Paris.

Macron received whistles and other protests as he met visitors to the fair and journalists. French farmers are discontent over producer prices, European Union trade talks and Chinese land purchases.

In a country with a profound attachment to its pastoral roots, the Salon de l’Agriculture is a mandatory rite of passage for political leaders, who tend either to relish the event – as former president Jacques Chirac visibly did – or endure it. Nicolas Sarkozy, during his presidential farm show debut a decade ago, let rip with an expletive-laden insult against a man in the crowd who had declined to shake his hand. His words were caught on video and haunted him for the rest of his term.

Macron responded differently to provocation on Saturday, scrapping his itinerary to engage several of his hecklers in a lengthy and detailed exchange on trade policy, social charges and food standards in front of TV cameras.