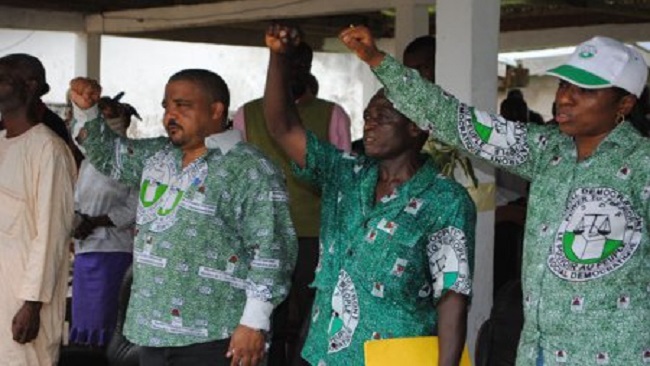 As the Congress of the Social Democratic Front (SDF) enters its second day, many analysts and SDF supporters are already agreeing that Joshua Osih is on his way to becoming the SDF’s presidential candidate in the upcoming presidential elections in Cameroon.

Though Barrister Mbah Ndam is also in the race, indicators about his success are trending low, as most delegates agree that it is time for a generational change within the party that almost brought down the ruling CPDM in 1992 presidential elections which, many say, was won by the emblematic SDF Chairman, John Fru Ndi, although Mr. Biya was granted the victory by a supreme court that was mainly composed of his supporters.

Speaking to a delegate who elected anonymity at the Congress Center on Friday, February 23, 2018, our correspondent in Bamenda gathered that almost all the delegates were looking in the same direction.

“We seem to be in for a coronation. Joshua Osih appears to be more popular with the delegates than any other candidate. We trust him and he has what it takes to give the ruling CPDM a good run for its money. Besides, many young Cameroonians want to see new faces in the political arena. Cameroonians are tired of seeing the same old people who have been in the corridors of power for more than five decades. They want change, I mean real change and we of the SDF believe that a younger and fresher face will bring us more votes,” the delegate said.

“We are in good spirit here at the Bamenda Congress Center. We initially thought the congress would not hold here in Bamenda following threats by unknown armed groups. The groups are mad at us because they hold that we are collaborating with the government. But that is not true. We want to bring the Anglophone problem to the National Assembly and if Cameroonians give us a chance at the upcoming elections, we will be able to address this issue. We think federalism will be able to address some of the issues Anglophones have raised. We do not need bloodshed in our country. Anglophones have legitimate grievances and those grievances must be addressed and the SDF is willing and capable of addressing those grievances in a federal system,” the delegate stressed.

He added that “the atmosphere is very conducive with more than 2,500 delegates coming from the ten regions.The elections of NEC members will soon take place while that of the presidential candidate will take place tomorrow.”

Speaking yesterday during the opening session, the SDF Chairman used the occasion to deliver his policy speech. Chairman Fru Ndi said he would not stand for presidential elections,but would hand the baton to a young man who resembled his father. This statement was interpreted by many delegates as implying that he was referring to Mr. Osih who is the youngest of the candidates and whose candidacy has been approved by both Anglophones and Francophones.

A highlight of the event was when Mr. Osih’s campaign materials arrived the congress hall today morning. The posters and calendars caused commotion as all the delegates rushed to have copies. As at the time of producing this report, no photos or campaign material of the other candidates had been seen anywhere close to the Congress Center and this is causing many delegates to hold that the young Osih is heading for a landslide.

It should be recalled that this congress is taking place amid high tension as unknown armed groups in the region had threatened to disrupt the event following criticisms by Mr. Fru Ndi, of the Southern Cameroons struggle for independence.

To ensure that the congress takes place as scheduled, the Yaounde government is providing top security to Mr. Fru Ndi, a situation that has further fueled rumor that he is playing ball with Mr. Biya. Even the location of the event is heavily guarded, as the armed groups are determined to wreak havoc.

It should be recalled that the Biya government that is providing security for the SDF today, was the same government that had maimed and killed many young SDF supporters in 1990 when the political party was launched because the Biya regime felt threatened that multiparty politics could sweep it out of power. It therefore declared the party launch illegal, creating a chaotic situation that resulted in the arrest and detention of many SDF supporters.

Similarly, due to threats, the SDF congress location has been changed as the owners of the previous locations were scared that their property could be burnt down or destroyed. The SDF has been seeking to bring the Southern Cameroons crisis to the floor of the National Assembly, but the ruling CPDM has been blocking all efforts at seeking institutional solutions to the Anglophone crisis.

The SDF has taken the threats of the armed groups seriously. It should be recalled that last week, the Batibo Divisional Officer was kidnapped and taken into a thick forest and attempts by government officials to locate him have been futile. Not even his body has been located even when rumor had swirled that he had been killed. For now, it is believed that he is being held by Anglophone separatists who are seeking to restore their independence from the Republic of Cameroon.

It is worth mentioning that the SDF is known to be in favor of a federal system in Cameroon and the party chairman as well as other officials have always chided the government for mismanaging a problem that has metamorphosed into a crisis that has already consumed more than 500 lives, including both civilians and soldiers.

Despite the increasing tension, many political analysts hold that the SDF congress is necessary, as it will enable the party to choose its candidate for this year’s presidential election. Many Cameroonians – both Francophones and Anglophones – hold that a new political class must emerge, as the old one has been a huge disappointment to the people.

For now, there are two outstanding candidates seeking the party’s top job. Joshua Osih and Barrister Mbah Ndam. So far, echoes from the congress give to understand that it is a coronation for Mr.  Osih who is very much respected in the country.

Mr. Joshua Osih is smart, bilingual, and patriotic, and he understands the people’s plight. After serving for long as his party’s vice-president and parliamentarian, Mr. Osih believes that this is the right time to help pull the country out of the political mess created by the Biya government.

It is also widely believed that his understanding of both Francophone and Anglophone cultures makes him the ideal candidate for the post of president in a country that might implode if the right person does not step in. His moderate stance on many issues has earned him the respect of the entire nation.

Joshua Osih’s time has come. He is being considered as the comprise candidate even by Anglophones who have clearly demonstrated their frustration with the Yaounde government. Cameroon needs to heal and only someone with Joshua Osih’s temperament and charisma will be able to help the country walk away from its ugly past.