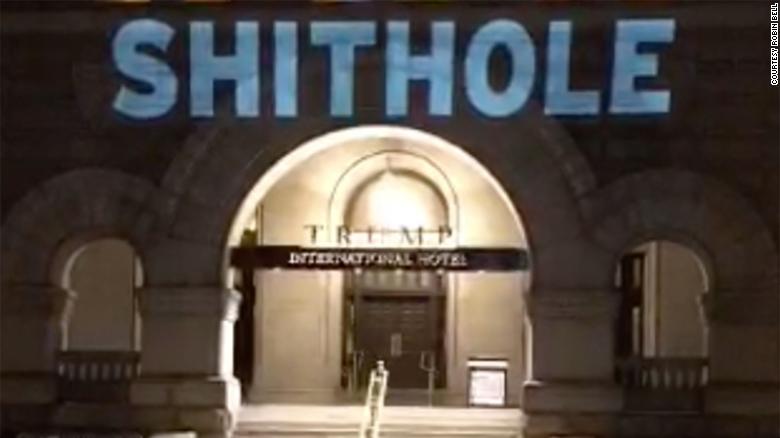 A projection onto the front entrance of the Trump International Hotel in Washington, DC, declared Saturday night that the place was a “shithole” — the term which President Donald Trump reportedly used during an immigration reform meeting with lawmakers last week.

“Not a DC resident? Need a place to stay? Try our shithole,” the projections read, with grinning poop emojis scattering the bricks of the Trump International Hotel, formerly the Old Post Office building.

Washington-based Robin Bell took credit for the stunt. He told CNN the projection was up for around 40 minutes and claimed this is at least the 15th time he’s projected his work onto the hotel.
“By the time security came out we were already done,” Bell said, later adding that he looks at the projections as a First Amendment activity. “We’re not actually touching the building. We’re not on the property.”
The projection came in response to reports that, in referring to immigrants from African countries, Trump asked lawmakers during an Oval Office meeting on immigration reform: “Why do we want all these people from ‘shithole countries’ coming here?”
Source:CNN