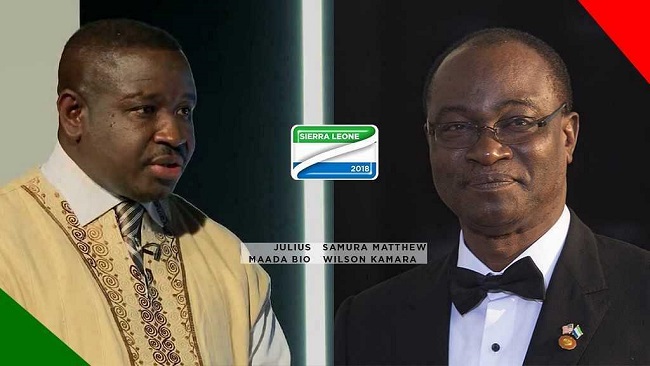 March 27, 2018 has been set as a runoff date to elect Sierra Leone’s next president. The National Electoral Commission (NEC) announced on March 13 that former foreign affairs minister, Samura Kamara will face Julius Maada Bio, a former military head of state.

Kamara who leads the ruling All Peoples Congress (APC) came in second after final results of the March 7 polls were declared. Maada Bio of the Sierra Leone Peoples Party (SLPP) won the first round with close to 1.1 million votes representing 43%.

A run-off presidential election between the first and second placed candidates is held two weeks after the certification of the results, unless a candidate wins 55% in the first round.

As part of our running coverage of the process, we present profiles of the two men aiming to succeed outgoing Ernest Bai Koroma as president.

Born April 30, 1951, the former central bank governor turned politician is aiming to continue with the APC government’s work even as Bai Koroma steps down. He will become the second APC candidate to occupy the presidency.

Kamara held the post of Central Bank governor between 2007 – 2009. He subsequently joined the APC and served in two top cabinet positions. Minister of Finance and Economic Development (2009 – 2012) and Foreign Affairs portfolio between 2012 and 2017.

He stepped down from his diplomatic responsibilities after the party elected him in October 2017 to lead their charge for a third straight term in office. This is his first shot at the presidency, he is credited with spearheading blueprint for Koroma’s first term in office.

He is a trained economist who holds a Bachelors Degree in Economics from the country’s famed Fourah Bay College. He also holds a PhD in Development Economics (1986) from the Bangor University in Wales, United Kingdom.

Samura is also celebrated as the lead technocrat who oversaw the country’s debt cancellation in 2007. The economy boomed under his tenure whiles Sierra Leone’s international relations soared during his tenure as chief government diplomat.

He is a Roman Catholic despite growing in a Muslim environment, most members of his family are Muslims. He is married to Elizabeth Massah Kamara. The vice presidential candidate of the APC is Bah Chernor Ramadan Maju.

He has also tasted how it feels to be on the ballot paper, he was the Sierra Leone Peoples Party’s candidate for the last elections. He lost to outgoing Ernest Bai Koroma who beat him in the first round of voting.

As a military ruler, he toppled his boss in the NPRC junta Captain Valentine Strasser in January 1996 but handed over to democratically elected Ahmed Tejan Kabbah of the SLPP after the 1996 presidential elections.