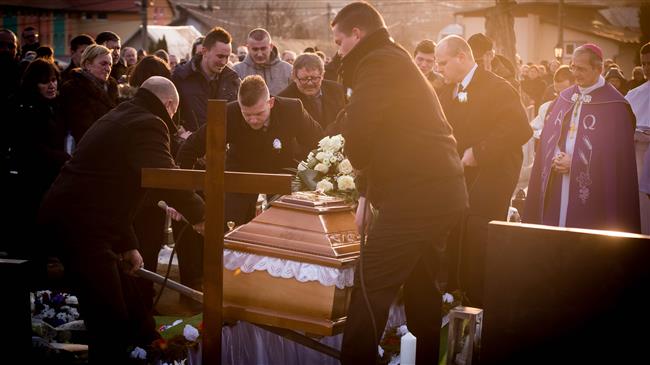 Slain Slovak investigative journalist Jan Kuciak was laid to rest in his wedding suit on Saturday as police released the seven Italian nationals who were detained regarding Kuciak’s explosive report on high-level corruption.

Kuciak’s murder has raised fresh concern about media freedom and corruption both in Slovakia and Europe. It follows the October 2017 assassination of investigative journalist Daphne Caruana Galizia, who had denounced corruption in Malta.

Kuciak’s burial in the northern Slovak village of Stiavnik came a day after his fiancée, Martina Kusnirova, was laid to rest in her wedding gown in the northern town of Gregorovce. The couple, both 27, were to marry in May.

The ceremony began with the reading of a poem written by Jan for his fiancée that he had planned to read at their wedding.

Leading the funeral mass, Bratislava Archbishop Stanislav Zvolensky told hundreds of mourners packed into the local Roman Catholic church that “if the murderer thought he was able to silence Jan, he was wrong.”

“He achieved the opposite. An attack on a journalist is also an attack on the freedom of our country. We must not allow it.”

Slovak police commander Tibor Gaspar has said the motive for murder was “most likely” related to Kuciak’s investigative journalism.

In Italy, prosecutors have suggested that the ‘Ndrangheta may have been behind the killing of Kuciak and his fiancée, who were found dead at their home near Bratislava on Sunday.

Kuciak was about to publish an article that raised possible political links between Italian businessmen operating in Slovakia and the ‘Ndrangheta.

Hours before the funeral, police released seven Italian nationals named in Kuciak’s report and who were detained on Thursday, a day after it was posthumously published.

Police investigators said that after “checking the facts,” they were unable to bring charges within the legal 48-hour detention period.

Thousands flocked to candlelit anti-corruption vigils for the murdered journalist held on Friday across Slovakia, an EU, and NATO country of 5.4 million people.

Leftist Prime Minister Robert Fico has accused the opposition of using the murder as a “political tool to get people out on the streets and gain power.”

The latest protests echoed a wave of anti-graft rallies by mostly young Slovaks last year demanding the dismissal of senior police officials and ministers in Fico’s government for alleged foot-dragging on fighting corruption.

The seven Italians were taken into custody on Thursday in police raids in the eastern town of Michalovce.

Slovak media reported that among those held was businessman Antonino Vadala — the owner of several companies — and some of his relatives, alleged by Kuciak to have links to the mafia and contacts in the Slovak government.

The allegations in Kuciak’s report triggered an angry rebuke from Fico, who showed reporters stacks of euro bills totaling the €1-million (US$1.2-million) reward he has offered for information that could lead to the killers.

Two close Fico associates were forced to resign after the article was posthumously published on Wednesday, while one minister quit in protest.

The party said Saturday it would meet on March 12 to decide whether to quit the coalition after Kalinak refused to step down on Saturday.

Fico once told journalists they were “dirty, anti-Slovak prostitutes,” but he vowed that his government was committed to the “protection of freedom of speech and the safety of journalists” in the wake of the murder.

Christophe Deloire, the secretary-general of Reporters without Borders (RSF), told AFP he had asked Fico on Friday in Bratislava to “clearly express his regrets” for having publicly insulted journalists, something the RSF chief called “dangerous.”

Fico’s office later issued a statement saying that there was “no call on the PM to apologize to journalists,” denying Deloire’s claim.

But contacted by AFP, Harlem Desir, the Freedom of the Media representative at the Organization for Security and Co-operation in Europe, confirmed that Deloire had called on Fico to apologize to journalists.

The European Parliament is expected to send a fact-finding mission to Slovakia as early as next week, German MEP Ingeborg Grassle said on Saturday.