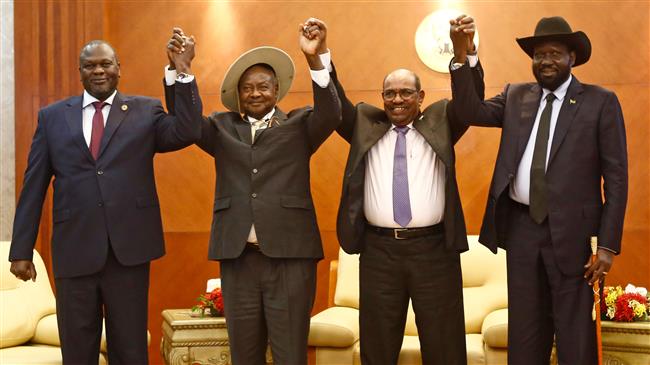 Major foes in the years-long conflict in South Sudan have embarked on a new round of peace talks to end the deadly war in the country.

The talks come after a first meeting in Ethiopia on Thursday failed to achieve any breakthrough. Regional East African leaders have been struggling to come up with a solution to the conflict in South Sudan, the world’s newest country which would be hit with United Nations sanctions if it fails to put an end to the bloodshed.

Tens of thousands of people have been killed and nearly four million others displaced as a result of the war, which erupted in December 2013 when disputes intensified between Kiir and his then deputy Machar. The two met face-to-face for the first time in two years in Addis Ababa on Wednesday, but failed to reach any agreement. South Sudan’s government said right after the meeting that it “had enough” of Machar.

South Sudan has repeatedly indicated that a future government could include rebel figures other than Machar who is blamed to have triggered the conflict by plotting a coup against Kiir five years ago. The official position, which was reiterated after talks in Ethiopia, once again showed the ever-increasing personal enmity between Kiir and Machar, which many say is the main cause of the protracted conflict in South Sudan that gained independence from Sudan in 2011.

However, Sudanese Foreign Minister Al-Dierdiry Ahmed said Monday that despite all existing differences between the two foes, talks in Khartoum could bear fruit.

“In this round of talks we are looking for a breakthrough to this thorny issue,” said Ahmed.