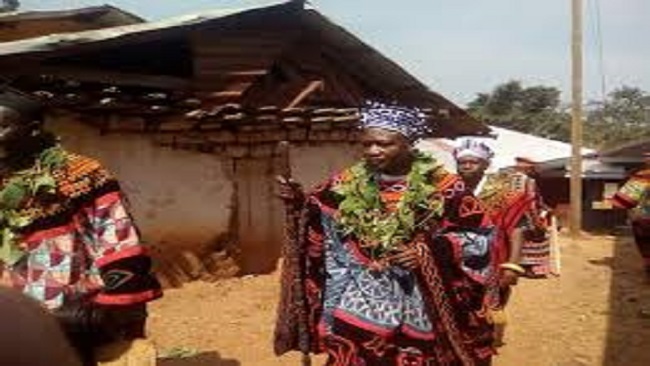 Five bodies were discovered on Friday in Bambili, a locality in the Tubah district, Mezam County in the Northern Zone of Southern Cameroons.

Cameroon Intelligence Report gathered that the men found dead were royals and employees on duty at the Fon’s palace in Bambili.

Our correspondent in Bamenda confirmed that the Fon’s Palace of Bambili came under attack from heavily armed Ambazonia Restoration Forces. The attackers entered the Bambili Palace and killed five persons who were on royal duty on that fateful day.

The Southern Cameroons self defense commander controlling the area recently blamed the Fon and his notables for French Cameroun army atrocities in Mezam. The Fon reportedly started a pro Yaounde campaign last month calling on Ambazonian fighters to lay down their weapons.

A Cameroon government army spokesman in Bamenda confirmed the attack on the Bambili palace and added that dozens of secessionist training camps have been dismantled by the defense and security forces in Mezam.

The Southern Cameroons crisis that has been shaking the so-called one and indivisible Cameroon since late October 2016, has led to an armed conflict between Cameroon government army soldiers and Ambazonia Restoration Forces.

According to the UN, more than 700,000 people have been forced to leave their homes in Southern Cameroons-Ambazonia as a result of the conflict. And more than 35,000 others have fled to neighbouring Nigeria.

The Southern Cameroons leader President Sisiku Ayuk Tabe told Jeune Afrique International magazine that some 30,000 Ambazonians have died as a result of the conflict.