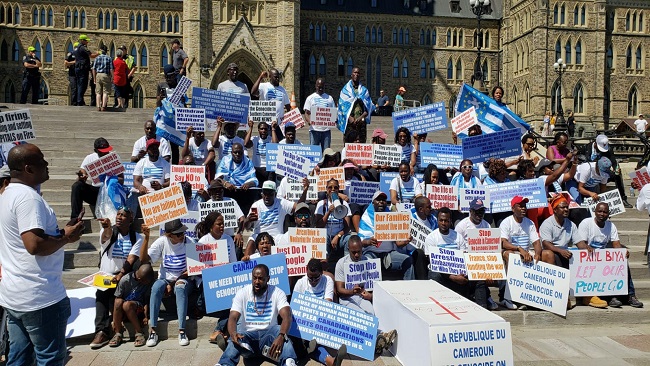 Southern Cameroons Crisis: Canada feels the anger of the Diaspora 0

The protest began at the Cameroon High Commission in Canada with protesters singing both patriotic and sorrowful songs with placards in their hands carrying messages like, “enough is enough, say no to dictatorship”, “stop genocide in Southern Cameroons”, “stop raping our women” and many more.

A casket was also brought out as part of the protest materials. Protesters could be seen wailing over the coffin for those who have been killed, raped and jailed unfairly in Cameroon. While the protest continued in front of the Cameroon High Commission, with no official stepping out to talk to the protesters, the protesters brought down the Cameroon flag that was hoisted.

This act caused the officials to come out of the office, with the High Commissioner to Canada, Solomon Azoh-Mbi, taking the lead to frown at the act. There was nothing he could do as protesters kept singing at the top of their voices “no violence”. He walked away from the scene and came out for the second time to witness the Cameroon flag being burnt and the Southern Cameroons (Ambazonia) flag being hoisted.

Feeling they had passed on their message  – though the officials made no statement – , the protesters left the premises heading for the United Nations (UN) representative’s office. While there, a petition was handed to the National Development Director, James D. Lee, who in turn called on the protesters to keep asking for what is right while waiting for a response from the UN. He promised to present their demands to the United Nations. The protest continued to the streets and ended at the Parliament Hill.

In an interview during the protest, the Vice President of SCRO said that that the protest aimed to create awareness among Canadians, the media and the international community of the genocidal atrocities being committed by the country’s army which has invaded and occupied the two English-speaking regions. Mr. Hippolyte Asaah said that more than a hundred villages had been burnt down, over 120.000 people internally displaced and many women and girls were being raped on a daily basis by the military which also carries out summary killings of men and families.

Also, the Secretary General of SCRO, Khumbah Efuange, said that it was not only Cameroonians in Canada who came out to protest, but also friends from Canada, Jamaica and Chad living in Canada, adding that if things did not change for the better, the protests would continue. He suggested that another protest might be organized on October 1, 2018; a day considered as Southern Cameroons Independence Day.