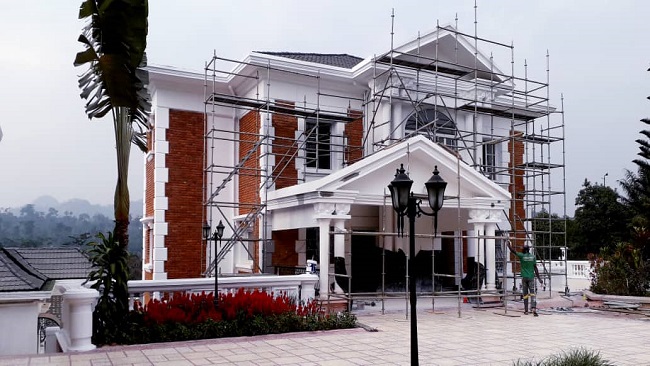 A French Cameroun social media guru has released images of one of the properties linked to Cameroon’s Defense Minister, Joseph Beti Assomo, who is facing corruption allegations over his handling of the Southern Cameroons crisis.

Cameroon Concord News Group gathered that the house in Minister Beti Assomo’s village is one of the many penthouses and flats he and his family own in Yaoundé and Douala, worth hundreds of millions of US dollars.

Cameroon’s Anti-corruption investigators have constantly ignored incessant signals coming from whistle-blowers in the Ministry of Defense for fear of being targeted by the Beti Assomo gang in the army and in the secret service.

Some of the Beti Assomo buildings in Yaoundé are held by companies registered under his blood relations as a way of hiding his wealth, making it difficult to be targeted by investigators at the Special Criminal Court in Yaoundé.

The 60-year-old, who replaced his kinsman, Edgard Alain Mebo Ngo’o, currently detained at the Kondengui Maximum Security Prison for corruption, is reportedly using the war in Southern Cameroons to enrich himself and his criminal network.

More will be yours in the days ahead.