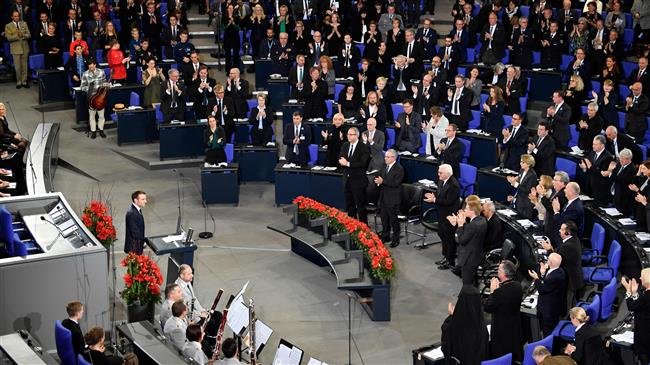 Yaounde is under pressure and the pressure is coming from an unlikely source. Its usual allies are slowly jumping ship and this spells a disaster for a government that is on its last leg. The European Union has sent a tough message to Yaounde and sources at the Unity Palace say the bad news is keeping Palace’s  occupants awake all night.

Though the French are still solidly behind the corrupt regime in Yaounde, Mr. Paul Biya, the country’s long serving president, knows that the tides are turning and turning very fast. The EU’s rhetoric is gradually changing and EU parliamentarians are not happy with the way the Yaounde government has handled the Southern Cameroons crisis that has put the country in the spotlight for all the wrong reasons.

For more than two years, the Yaounde government thought it had many allies and with such a played out mindset, it has gone about killing its own citizens, especially in the North West and South West regions.

But this week’s discussion of Cameroon in the EU Parliament has clearly revealed that Yaounde has no allies and its hopes of continuing to ride roughshod over the opposition have been dashed . Speaker after speaker at the EU Parliament only lambasted Mr. Biya’s long rule that is collapsing from within.

The EU Parliamentarians also pointed out that the mind-blowing human rights abuses in the country only spoke to the desperation of a regime that has overstayed its welcome.

The speakers clearly indicated that the EU had the means and resources that could bring down the gerontocracy in Yaounde. EU parliamentarians want to use their influence to mount pressure on Mr. Biya who has rejected all calls for an inclusive dialogue.

The EU might have been quiet for a long time, but its members have now decided to speak out and to call on France, the only big nation still supporting Mr. Biya, to take the appropriate steps that should lead to a peaceful and inclusive dialogue that the Yaounde government has rejected for years.

While EU Parliamentarians acknowledged that Cameroon was a strategic partner in the fight against Boko Haram, they also pointed out that good friends should also be reprimanded when they are straying into violence and irresponsibility.

The Cameroon government, they said, had used the fight against terrorism to stifle genuine political opposition. They stressed that in prosecuting its war against religious extremists in the country’s northern part, the Biya regime had committed despicable acts of atrocities that must be condemned.

They pointed to the killing of a woman and her children by government forces, adding that the videos of those killings did not show that those killed were terrorists. They also condemned the army’s reckless and wanton killing of innocent civilians in the two English-speaking regions of the country.

The EU Parliamentarians regretted the fact that the government had not displayed any remorse for the chaos it had created in the country, adding that the EU should help the thousands of Cameroonian refugees who are scattered all over Nigeria and those who have been internally displaced by irresponsible army soldiers.

The EU Parliament clearly backed the U.S. decision to curtail military aid to the Cameroon government because of its awful human rights records. They constantly urged the beleaguered Yaounde government to release Professor Maurice Kamto and his supporters, pointing out that Mr. Biya had been in power for far too long and should start thinking of transferring power to a younger and more democratic leader.

These unsettling messages from the EU Parliament come on the heels of the acerbic criticism by the U.S. Under-secretary of State for African Affairs, Tibor Nagy, who has openly congratulated Cameroon’s Diaspora for the effective public relations job it has done to bring the world’s attention to the unfortunate civil war that is playing out in Cameroon. Mr. Nagy recently said that he was looking forward to profound change in Cameroon following the collapse of Omar El-Bechir’s government in Sudan.

It should be recalled that Americans and Canadians have been working behind the scenes to get Mr. Biya out of power, though they have not produced any real results. With the EU now on board, it is clear that the coalition against the ruthlessly inefficient Yaounde government is widening and the collapse of Africa’s longest serving leader is imminent.

The Biya regime has bitten more than it can chew. It has overplayed its hands and it is now running out of luck. The multiple conflicts in which it is involved will very soon relegate it to the ash heap of history.

In the northern part of the country, Boko Haram is still a threat and the government’s reckless killing of innocent civilians there has only pushed young northerners into the arms of the religious sect and this is making it hard for it to win the war.

In the two English-speaking regions of the country, it is clear that there will never be any outright military victory for the Yaounde government despite its adoption of a scorch earth policy. Many Southern Cameroonians have been killed, but the will and determination of the people and fighters remain intact. Southern Cameroonians are resolute and they hold that co-habitation with a violent Francophone regime is impossible and that only separation will solve their problems.

The government’s mismanagement of the situation has radicalized even the most level-headed Southern Cameroonian. Even chiefs and parliamentarians have begun displaying their disagreement with the government strategy of killing all young adult males in the North West and South West regions.

In a dramatic turn of events in the country’s senate, the eldest member of the upper house, Chief Victor Mukete, put his frustration and disagreement with the government on display. He castigated the government, decrying the government’s insistence on addressing the issues only through military violence.

Chief Mukete who is not being taken seriously in the English-speaking regions had however made a point – Southern Cameroonians, even those in government disagree with the government’s strategy and if that does not change, they will jump ship.

The message is clear. Even within the military, there are many dissenting voices and this is causing the government sleepless nights. With the government facing a flood of opposition both within and from outside, it is clear that it will be changing its strategy in the days ahead for fear of being chased out of power, especially as rumor is swirling that Americans could arm Southern Cameroonians for them to head to French Cameroon so as to put an end to the political mess in Yaounde.

There is fear that all these unfortunate circumstances could connive to unleash a people power revolution in Cameroon. The north is already boiling. The English-speaking regions are in a civil war, while in the east of the country, Central African rebels have stepped up their attacks on government forces and refugees. The conditions for a long-lasting chaos seem to be in place in Cameroon.

The world does not want to see Cameroon go down that path. Their best solution is to elbow Mr. Biya out of power and there are currently talks between the great powers on how to achieve this goal without putting the entire region in a tight spot.

While the French have publicly displayed their support for the failing Yaounde government, they are however gradually conceding that Mr. Biya clearly belongs to the past. They hold that if he is not replaced, they could lose their interest in the region.

Mr. Biya is therefore on the ropes and given his age, he is clearly out of steam.  The pressure is mounting and Yaounde is on the wall. The days ahead will be crucial, especially as Prof. Kamto’s supporters at home and abroad are scoring more points.

Another people power revolution is surely going to take place in Africa and this time around, it will be in Cameroon, as all the ingredients are already in place. The world will surely be playing spectator soon to the fall of another reckless and ruthless dictator.

By Kingsley Betek and Soter Tarh Agbaw-Ebai in the United Kingdom.