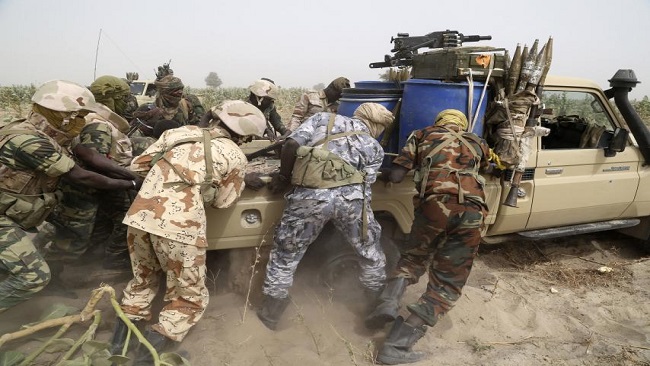 The Southern Cameroons crisis that started with demands by lawyers and teachers has gradually taken different dimensions after more than a year following the government’s decision to embrace the war path instead of the honest and inclusive dialogue that many across the world have called for. For many months, there have been speculations that foreign fighters have been guiding and training young Southern Cameroonians, but the first serious confirmations have been made by the SDF vice-president, Joshua Osih, who had to meet with them while taking his father’s remains to his native Ndian Division.  Mr. Osih, a respected SDF parliamentarian had to walk miles into the jungle where the Ambazonian fighters were lurking to seek permission and passage rights to his native village so as to give his late father a decent burial.

According to our source at the SDF Secretariat, Mr. Osih almost came under attack when he finally reached where the Southern Cameroons fighters were lying in wait for any government troops that might be heading to Ndian Division. Luckily for him, he was recognized by some of the zealous fighters who considered him a responsible and respected son of the South West region of the country. He was subjected to serious questioning and was asked if government officials would be attending the event.

He said none had been scheduled to be present at event. He was let go when he handed a huge wad of cash to the fighters who informed him that they would be keeping an eye on the event to ensure government agents did not infiltrate the location. The fighters later accosted my Osih at his residence in his village when they noticed that some government officials had made their way to the event. Mr. Osih had to explain himself and expressed his sincere apology, adding that he had not invited them, but they had shown up on their own.

Mr. Osih, who informed his colleagues at the SDF secretariat about the situation, said he had come face-to-face with foreign mercenaries, some of whom were white. Our reporter in Ndian Division who is very close to the fighters has also confirmed that some white South African mercenaries are already on the ground to help structure the Amba Tigers and other groups and to provide short intensive training on hit-and-run tactics.

It should be noted that Mr. Osih has nothing to do with the rebellion that is playing out in the two Anglophone regions of Cameroon. He is a politician with strong faith in republican values. He is a much-respected politician and is expected to succeed the aging and ailing SDF Chairman, John Fru Ndi, soon. Many analysts hold that Mr. Osih could be the next president of the country if free and fair elections were held in 2018. He is very bilingual and has a sound understanding of the issues and challenges facing the country.

Recently, a young Southern Cameroonian fighter who unexpectedly showed up in Abuja said the the fighters needed more sophisticated war machines so as to take the fight to the enemy. Speaking to our West Africa Bureau Chief, Kingsley Betek, he said that with rudimentary equipment, the fighters had given government troops in Manyu Division a run for their money, adding that sophisticated equipment would enable them to post more impressive results. “We are ready to turn that country into a huge fire ball. Southern Cameroonians have been marginalized for more than five decades and the government is refusing to acknowledge this. Since the government thinks it cannot dialogue with our leaders, we are determined to split the country so as to put an end to the marginalization that has brought death and destruction to our parents,” he said, adding that “once we lay our hands on sophisticated war machines like AK-47s, we will be able to get into the Littoral and West regions where we would be able to create hordes of refugees; a situation that will surely catch the attention of the international community.” “We are not scared of death and we have been informed that our brothers in the Diaspora are raising funds to ensure we get the tools for our job. This is a huge challenge and it requires a huge tool box,” he stressed.

It has been reported that some three hundred government troops have been sent to an early grave since Ambazonian Tigers decided to take up arms against a regime that is tone deaf to calls for an inclusive and sincere dialogue. As a response to the losses, the government has decided to deploy more troops to the regions. But many analysts hold that the more troops the government deploys, the more targets it creates for the fighters. The situation in the two Anglophone regions is getting more complex by the day.

Currently, there are more than five militia groups operating in many parts of Southern Cameroons and this is troubling to the international community that is already seeing the phenomenon of warlords playing out in Cameroon. It should be recalled that Somalia that has been a hotspot for more than three decades went through a similar situation like the one unfolding in Cameroon following the ousting of the country’s dictator, Said Barre, in the eighties.

While the situation in the Anglophone regions is spiraling out of control, the country’s president, Mr. Paul Biya, has disappeared to Switzerland where he is seeking medical attention for his failing heart and prostrate. He has been traumatized by the Southern Cameroons crisis to the extent that he has lost sleep for many months. But Cameroonian activists are already at work to locate where the most inefficient dictator on the African continent is taking refuge. They argue that his place is not in Switzerland but in Cameroon where he has not built any good hospitals for thirty-five years and has transformed the country into an open-air killing field.

According to our source at the presidency, the word Anglophone sends Mr. Biya into deliriums. Our source adds that he has been very withdrawn in recent times and is making conscious efforts to avoid Anglophone senior officials such as Atanga Nji and Victor Mengot Arrey Nkonho who are working at the Presidency, as he holds that their loyalty to him is not sincere.

He believes that they are sympathizing with their fellow Anglophones, though they pretend to side with the government. This is polluting the atmosphere at Unity Palace and other offices where there are senior Anglophones. Many of these Anglophones now watch whatever they say in order not to hand any talking point to the Beti Mafia that is keeping an eye on them. They know any mistakes on their part could lead them to Kondengui, the country’s notorious maximum security prison, where some of their colleagues have taken up residence for many years.

In a related event, rumors about the extradition of Anglophone leaders to Cameroon are still swirling in Yaounde despite all the evidence indicating that they are still occupying the luxurious villa given to them in Abuja. Our sources in Yaounde hold that the Yaounde government has been frustrated by the Nigerian government which holds that the extradition should play out in court. The Nigerian government wants the international community to see it as a fair player when it comes to human rights. It had agreed with UNHCR that Southern Cameroons leaders in detention would be visited by UN officials to determine their status. The Nigerian government has further reassured the UNHCR that the detained leaders would not be returned to Cameroon. This is contained in a UNHCR report on the situation in Cameroon released on January 24, 2018.

From the look of things, the Cameroon government will surely have to negotiate a way out of this crisis that is consuming many lives. It will have to come down its ivory tower to meet Southern Cameroons leaders halfway. Time is fast running out and the more time it loses, the more complex the situation becomes as many armed groups are throwing their caps into the ring. Dialogue is the answer. The government must dialogue with Anglophone leaders. You never dialogue with your friends, you dialogue with your enemies to find a peaceful solution to a thorny situation like the one that has given the country a bad name because of the government’s inability to understand that times have changed and mentalities have evolved. Old ways will no longer work. Intimidation and corruption cannot cow everybody into silence. It’s time to change tactics and strategies if Cameroon has to avoid becoming the next Somalia where warlords and mercenaries will be the masters.

With files from Kingsley Betek in Abuja, Nigeria