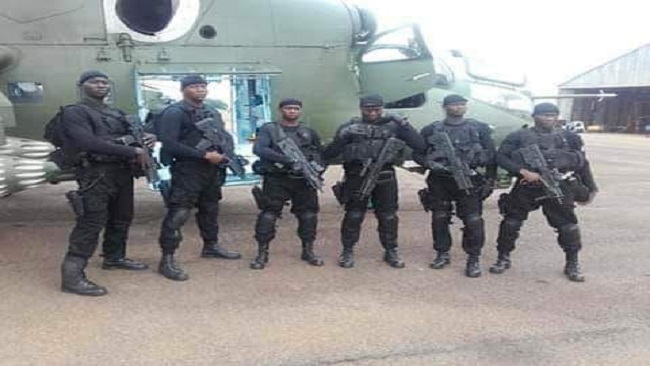 Southern Cameroons Crisis: Genocide will not address the issues 0

The Southern Cameroons crisis that started in October 2016, has entered a critical phase with the Yaounde government destroying anything in its path. Despite condemnation by the international community for the atrocities playing out in the two English-speaking regions of the country, the government has been pushing ahead with its plan to depopulate Southern Cameroons.

Over the last weeks, government troops have been gunning down innocent people in the country’s North-West region. Many of those who have been brought down by the taxpayer’s bullets have nothing to do with the rebellion going on in the country’s two English-speaking regions.

In Bali, government troops used chemical and biological weapons to kill many young Southern Cameroonians who they claim are Ambazonian fighters and to hide their crime, the bodies were burnt. More than 30 bodies were involved in this macabre destruction of human life that does not even seem to catch the international community’s attention.

These soldiers seem to be on the prowl, looking for young men to kill. From every indication, the government’s plan is to depopulate the region by killing the young, hoping that the rebellion will be extinguished once and for all.

On Monday, a young businessman was gunned down by army soldiers in Bambui, North West region. To make matters worse, the same soldiers looted the man’s store and made away with goods estimated at more than CFAF 3 million.

The government’s killing spree has affected many people in the region and even foreigners have not been spared by the bullets of a government that professes peace, but practices violence.

Last week a Kenyan priest was killed in Kembong by army soldiers and the Bishop of Mamfe, Bishop Andrew Nkea, took the government task after the Communication Minister, Issa Tchiroma, told his usual lies that the priest had been killed by Ambazonian fighters.

A few weeks ago, an American missionary was also killed by army soldiers in the Northwest region and this has strained relations between the Cameroon government and the Trump Administration that is asking for answers.

In many parts of the region, army soldiers have been burning homes and ruining people’s lives and not a single soldier has been arraigned for such inhuman and irresponsible behaviour. This has prompted many people in the region to actually ask if the government really wants to solve the issue.

To gain a better understanding of the situation, Cameroon Concord News Group sent its reporters to the Northwest region to investigate the killings.

Speaking to a senior official of the ruling party who elected anonymity, the reporters gathered that the Defense Minister, Joseph Beti Assomo, and Territorial Administration Minister, Paul Atanga Nji, had set up a scheme to kill all the young men in the region. In their thinking, they will prove to their boss, Mr. Paul Biya, that they are winning the war.

The official who is so disappointed with the Biya regime also revealed that despite the killing of young innocent men in the region, the government is not winning the war. He added that those who are being killed are actually not the fighters, but young men who just want to live their lives.

He also stressed that the killing of young men in the region is not addressing the matter, as many more young people are simply being radicalized by the government’s irresponsible behaviour.

He pointed out that with just den guns, the determined fighters, who have been using hit-and-run tactics, have inflicted a lot of pain on the country’s military, adding that some 3,000 soldiers have been victims of the war.

He added that the government was hiding the number of casualties in order not to shock the Francophone population that is gradually asking questions about the fighting in the two English-speaking regions of the country.

“The fighting is consuming many of our soldiers. Thousands have already been buried and many have been maimed. This is a war that will be around for a long time and its impact will stalk those who ordered it for a long time. The blood of those who have been killed will be one reason why  many young fighters and our soldiers will not be having a good night’s sleep, even after the war would have been over,” he said.

“The government might be saying that Cameroon is one and indivisible, but it understands that Southern Cameroonians do no longer want to belong to the fake union that the United Nations concocted. They have been marginalized for 56 years and now the government is killing them with impunity and it still holds that the country is united? It has to face reality. It will be hard for this issue to be addressed, especially through the means the government is using. The government seems to be sending a message to Southern Cameroonians, but that message is clearly the wrong one” he said.

Southern Cameroonians will surely not be listening to those stories from a government that is mowing down their brothers and sisters as if they are animals just because of their resources. The South West region, in particular, is a receptacle of God’s blessings for the country.

The country’s oilfields are located in Ndian Division and there are huge gold deposits in Mbonge. Manyu Division has huge expanse of forest that is the envy of the world and it is alleged that this division, noted for its learned people, is sitting on huge oil deposits. There was some exploratory work in the region before the conflict broke out. This will surely continue when the guns stop spreading death.

The region’s waters are also home to large fish stocks. Its forest is home to unimaginable fauna and flora and it is not in error that the world also knows the country because of the Korup National Park which straddles Manyu and Indian Divisions. The South West region is also known for its fertile volcanic soil and this explains why agriculture is one of the many activities that have been yielding huge foreign earnings to the country. Many of the country’s neighbours have their food supply from the south west region.

Unfortunately, this region is one of the poorest in the country.  Its people are still living in abject poverty and what passes for medical, school and road infrastructure clearly belongs to another epoch. The South West deserves better, but years of marginalization have left the region in dehumanizing poverty.

While the country has been raking in millions of dollars from the region’s oil, the residents of the region have been tied up in degrading poverty. The country’s lone refinery (SONARA) is located in Southern Cameroon, precisely in the Southwest port city of Limbe formerly known as Victoria, but the natives of the region have been reduced to sorry spectators of events in their own region.

The Southern Cameroons crisis is also born of this injustice. More than 90% of the refinery staff are Francophones and to add insults to injury, staff of the refinery have their own neighbourhoods that are well designed and very clean. Besides, petroleum products are more expensive in the South West region than in any other region of the country.

This economic apartheid that has been around since 1977 when oil was discovered in Ndian Division is one of the many reasons why Southern Cameroonians hold that a clear break with East Cameroon will be the ideal solution and they are willing to sacrifice their lives so that future generations will not have to deal with the same issues.

They want to walk away from this ‘political marriage’ that has brought them more pain than gain. Though it will take time to achieve such an outcome, Southern Cameroonians back home, now known as Ground Zero, hold that it better to die trying than to sit and watch other people enjoy their God-given wealth.

If they succeed to walk away, then Cameroon will be losing about 60% of its wealth. Southern Cameroons is blessed with enormous wealth and the Yaounde government holds that it is by terrorizing the people that it will succeed to keep them in the dark of what is happening to their resources.

For almost 50 years, the Rio Del Rey estuary in the South West region has been the source of more than 90% and at times 100% of all the country’s hydrocarbons, specifically oil. Since 2014, Cameroon has exported more than US$5.88 billion worth of products, of which more than US$2.65 billion, about CFAF 1,650 billion, has been from crude oil alone. This is a significant amount of money and the Yaounde government cannot afford to lose such revenues.

The government is not only frustrated, it is scared, as the possibility of a secession is there. All its efforts to lay the matter to rest have been futile. Its divide-and-rule strategy has simply fallen apart as North westerners and South westerners clearly understand that they are united for a cause that will bring them happiness and prosperity. Not even the government’s military violence has succeeded to take the wind out the fighters’ sail. The more the government kills, the more determined the fighters become.

The government had underestimated the will of the people of Southern Cameroons to right the wrongs of the past. For many of them, their fate is worse than death and they have very little time to be around this planet. They want to establish their own country and even ensure that future generations do not deal with such time-consuming and energy-sapping challenges.

And they are receiving huge support from the Diaspora that has transformed this issue into an opportunity for its strength and influence to be felt. With some 4 million Southern Cameroonians out of the country, it is likely that more money will be flowing to Cameroon to feed the war that has rushed many young men and soldiers to an early grave.

While many parts of the world are working hard to avoid wars, Cameroon seems to be working in the opposite direction. Many people across the world are still surprised at the turn the conflict in the two English-speaking regions of the country has taken.

They had thought that with age, Mr. Biya who is clearly on his way out of this world, would opt for peace. They argue that wisdom comes with age and that age should be one reason why Mr. Biya should leave the country on calm shores.

The greatest disappointment comes from the international community, especially the United Nations and the African Union which have entered into a conspiracy of silence. The African Union is supposed to be working towards conflict prevention, but it has proven in the case of Cameroon that it does not care and that the genocide is permitted on the continent even after the world had sworn in the 1990s that it would no longer allow another group to commit the type of killings that had been witnessed in Rwanda and strangely, the African Union Chairperson is Paul Kagame, the Rwandan President. What an irony of sorts.