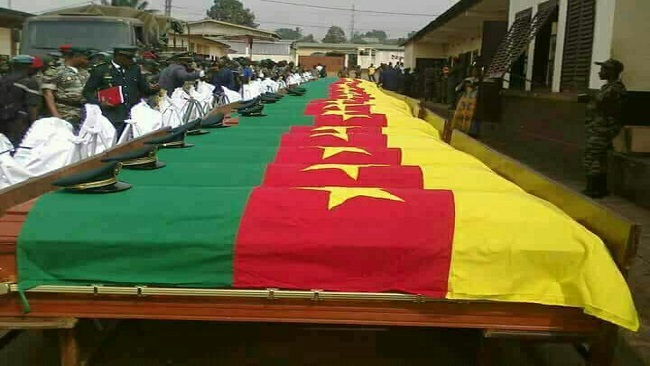 The Southern Cameroons crisis that started in 2016 has finally entered a very critical phase. The Yaounde government is in trouble as the two “cubes of sugar” refuse to melt.

According to a source in the military, many army soldiers have lost their lives and hundreds have been wounded in the jungles of Ndian, Manyu and Meme Divisions. The wounded are alive and are today telling their stories and many clearly indicate that there is something mystical in the way the Southern Cameroons fighters conduct themselves.

Today, many French-speaking Cameroonian soldiers are scared of going to fight in the restive English-speaking regions, having seen the type of wounds some of their colleagues have sustained in the battlefield. It’s now normal for junior officers to bribe their seniors so that they don’t get sent to Southern Cameroons which in the minds of many army soldiers is synonymous with death.

It is also being rumored that the country’s defense minister, Joseph Beti Assoumou, is making a huge fortune from the chaos that is playing out in southern Cameroons. A source close to the presidency has indicated that even the president is gradually questioning the rationale behind the fighting, as there is no light at the end of the tunnel.

Cameroon government officials are gradually coming to terms with the fact that the two “cubes of sugar” they thought would easily melt, will unfortunately not be melting anytime soon. The source added that the government was admitting that it had underestimated the role the Southern Cameroons Diaspora would play in the entire process.

Government officials, the source says, are aware that if the crisis has to fizzle out, the Diaspora must be appeased. But for now, they are not sure of who to talk to. The situation has spiralled out of control and it will be hard to stabilize the region without making peace with a Southern Cameroonian Diaspora that numbers well over three million and it is determined to give the government a good run for its money.

The human cost of the conflict is staggering. Soldiers and civilians have been killed in a conflict that could have been avoided. The government has simply stopped announcing the killing of army soldiers, as this may have a huge impact on those who are being sent to the restive English-speaking regions.

“It is unbelievable that I have not heard from my brother since he was sent to Ndian Division in January. I have called his number, but I keep on hearing that it is no longer in service. My brother was very communicative before he got deployed to the Southwest region. I have tried contacting the military, but none of those I have talked to has been able to give a clear-cut answer. I know the military is hiding something from us, but for how long will they do that. I know of a friend who was in the same situation and the top military brass kept telling them that their brother was on mission, until his friends sent them pictures of their brother having been killed by those ruthless Ambazonian fighters. The family has now got closure, but it does no longer trust the Cameroon army,” a relative of a soldier on mission told our correspondent in Yaounde.

While the physical wounds could be easily healed, the psychological wounds might never go away. Many army soldiers are now dealing with mental health issues and many of them have been caught in a nightmare that will not be going away anytime soon. For those who have killed civilians in the process, theirs appears to be the kingdom of tears. Many of them cannot sleep and are having a tough time eating.

The wounded are letting the world know the truth about the state’s finances. The government clearly lacks the resources to deal with the victims of a war it hastily declared. Many of the families affected by this situation are really questioning the wisdom behind this senseless war.

“Look at how my brother is suffering today. He was healthy before he left for Mamfe to fight those the government said were the enemies of the state. He got scarred both physically and psychologically and today, he has been abandoned by the government that promised to help them in the event of any casualties. He cannot sleep. He has not slept for days and he keeps on saying that he is seeing dead people around him,” the sister of a psychologically scarred army soldier told our correspondent.

But the government’s greatest problem is not the physically and psychologically wounded. It has found a way of ridding itself of this burden. According to the government, it suffices to give the affected family some money and discharging those scarred from the military. Since the system is not organized and data is hardly kept, it is a lot harder for the population to really figure out the truth.

The media is not developed and those who pass off as journalists, do not have the financial and intellectual capacity to conduct investigations that will clearly expose the government. This gives the government the feeling that it is off the hook. But the International Crisis Group and Amnesty International are carefully gathering information in this regard and this will surely embarrass the government when the time comes.

But this appears to be the least of the government’s concerns. Its focus is on its leaky treasury that is spelling hard times for the country’s burgeoning civil service. The country’s financial indicators are trending very low. Government coffers are empty, and many ministries do not have the resources to carry out some of the main projects that had been included in this year’s budget.

Many missions have been canceled and senior civil servants have been urged to reduce cost as much as possible. The Southern Cameroons crisis has hit the government like a ton of bricks. There is panic within government circles, as empty coffers spell huge problems for a government that is yet to recover from the punch it has taken to the liver.

Its image and reputation have been badly battered. Its noise about having one of the best military on the continent has turned out to be a bluff. Ambazonian fighters have put their young and poorly trained troops through their paces. They are simply not a match for these young, determined English-speaking fighters who are determined to take the war to East Cameroon.

The government is simply overwhelmed. It is out of resources and the French who have been supporting its military action are gradually back-pedaling. The French understand that the government has stirred a hornet’s nest and it will take time for it to find the appropriate solution to this problem. Even the government now knows that it is in for a long haul and if it has to successfully prosecute this war, then it must turn to other sources.

The French alone will not provide the much-needed resources to roll back the various armed groups in the English-speaking regions. This is being compounded by the government’s legendary corruption that has become its hallmark. The military generals are making hay while the sun shines, as the government heads abroad, cap in hand, to beg for money to prosecute a warthat was not even necessary.

Mr. Biya’s recent trip to China was designed for him to sweet-talk the Chinese into giving him money so that he could meet his domestic commitments. But the Chinese, noted for their craft and intelligence, carefully steered everything towards business and bilateral cooperation.

They understand the Biya government is a deep dry hole. They are simply not interested in pouring their money in a venture that will never yield any dividends.  Mr. Biya might have been promised lots of things, but he knows that it will be an uphill task for him to get free money from the Chinese who themselves are dealing with some financial headwinds, especially as the global economy is facing some tough challenges.

The Biya government is clearly on the back foot. Its dwindling resources are keeping government officials awake all night. Ambazonian fighters just have to continue pouring pressure on the old and ailing government and it will crack very soon. With its treasury running short of money, it is clear that civil servants will soon be taking to the streets to call for the payment of their salaries. If this happens, even the docile Francophones will join Southern Cameroonians to kiss goodbye to the reckless and inefficient Yaounde government. The writing is clearly on the wall and with elections looming large, the government knows this year may be its last.

It might have held senatorial elections which of course do not represent anything. But parliamentary and presidential elections will surely be a tough test for a government that is cash-strapped. The Ambazonian fighters are prepared to disrupt the elections. The government lacks the military and policing capacity to ensure the elections hold across the entire country. Boko Haram is also messing up things in the north and Central African Republic fighters are sowing chaos in the east. It is clear that the government has a lot on its plate. Its best option, according to political experts, is for it to sue for peace. But will its legendary arrogance let it do the right thing?