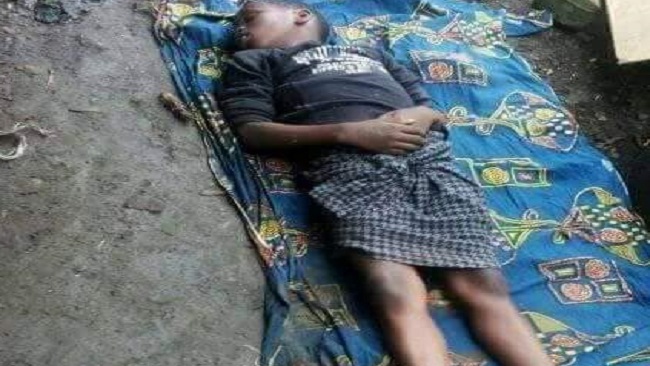 As the crowd moves out of Southern Cameroons, the country’s military has transformed the place into a slaughterhouse. Pictures from Njikwa and Bafut speak to the type of carnage that is taking place in towns deserted by the population.

While the majority of the population is out, those who do not have relatives out of their main towns have opted to stay and this is costing them their lives. Government militias dressed in the country’s military fatigue are on a rampage. The government has trained a group of Beti killers and unleashed them on the Southern Cameroonian population. A massacre of a global scale is unfolding in many villages and towns in the English-speaking regions.

Pictures emerging from the region are too graphic to be shown. The story is hard to tell. Young men hiding in their homes have been reduced to a mass of flesh as army soldiers move from house to house to carry out a mission they have been handed by Defense Minister, Joseph Beti Assomo, and Territorial Administration Minister, Paul Atanga Nji.

A source close to the government has hinted that the ministers of defense and territorial administration have hatched a plan to end the fighting through brute force. They believe that once many people are killed, there will be no need for an inclusive dialogue. They want to keep the system as it is, even when Cameroonians are complaining and feel that reforms are necessary.

“They have trained killers to kill young able-bodied Southern Cameroonians in the region. This is not the right time for any young man to be in the Southwest and northwest regions. The government has decided to cleanse the region and its militia and military are working hand in glove to implement a plan put in place by the defense minister and his collaborators,” the source said.

“The days ahead will be the bloodiest. The government has no respect for human life. I am really ashamed to be called a Cameroonian. I wish I could express myself in public, but the position I hold makes it hard for me to speak. I am dying in silence. Our country is going through the toughest moments in its history. How can a complaint by a peace-loving people be allowed to degenerate into a civil war,” he added.

The source, which elected anonymity, asked why the international community was not taking this issue seriously. “Why has the international community abandoned Southern Cameroonians? When will they come in to end this carnage? There is a massacre unfolding in many part of the English-speaking region. The world has to act before the militia and military kill everybody,” he said.

While the killings are going on, the Yaoundé government has decided to seal its leaps. The massacre speaks to a well-orchestrated genocide. The government of Cameroon has decided to wipe out all adult males from certain communities as a move to end any opposition it might face in the region.

With presidential elections on the horizon and October 1 which is considered by many Southern Cameroonians as their independence day, the government is hard at work to ensure that it faces no challenges in the two English-speaking regions of the country.

Ever since the slaughtering of Southern Cameroonians started in October 2017, the country’s president, Paul Biya, who is also known as the monarch has not expressed any regret about what is happening in the country.

Even with the influx of Southern Cameroonians into East Cameroon, the Yaounde government has not made any public statements regarding the welfare of those fleeing the conflict in the region.

The Southern Cameroons crisis which started as a demonstration by teachers and lawyers in Cameroon’s English-speaking regions is finally migrating to East Cameroon, as thousands flee Southern Cameroons following threats from Southern Cameroonian fighters to stage sporadic attacks on soldiers and punish civilians who have been cooperating with the Yaoundé government.

All major cities in Southern Cameroons have become beehives as helpless civilians struggle to find a safe place before the expiry of the deadline given by the fighters. Buea, Mamfe, Limbe, Bamenda and Kumba have all witnessed huge crowds struggling to leave, following warnings from Southern Cameroonian fighters that from September 16, 2018, all roads will be blocked and there will be no movement in the region.

More than half a million people, last week, left the English-speaking region as presidential elections scheduled for next month approach. The Southern Cameroons crisis has taking a turn for the worse. While there are some helpless people in the region, the government has intensified its attacks and it has, so far, not issued any statements to reassure the fear-stricken population that is still living there and local officials have been tight-lipped over the displacement of over half a million people in the region.

Over the last two weeks, more than 500 civilians have been killed in the region, while some army soldiers have been sent to an early grave by restoration forces. The government has been struggling to localize the Southern Cameroons crisis, but as the fighting intensifies, many people are seeking refuge in the French-speaking region of the country.

The mass movement of Southern Cameroonians into other parts of the country has resulted in escalating food and housing prices. The high living cost is keeping government officials in cities such as Yaoundé and Douala awake all night, as they fear that the increasing pressure might cause the cash-strapped Francophone population to rebel against the government.

Ever since the crisis started, many eminent people across the world have called on the government to change its strategy, but the president of the country, Paul Biya, and his collaborators still see military action as the only option and this is what is causing the escalation.

The devil seems to be at work in Cameroon. Power and money have caused the government to lose its decency. In normal environments, peace talks will be going on to avert the worst. In Cameroon, that is not happening. Even when the country’s economy is taking the heat, the Yaoundé regime still holds that it can only crush opposition by force.

When is the government going to figure out that dialogue can produce more results than military action? When will it know that innocent civilians are being killed for crimes they have not committed?

When will it understand that to live in peace with other people, it must not use brute force?  Why has the government taken a position that is not tenable? The more it wants to destroy the fighters, the more the fighters want to prove that they can stand the test.

These extreme positions are not helping anybody. A shift in thinking and mentality could bring about peace and unity instead of military action. Cameroon is on the brink. The devil is at work in Cameroon. Many lives have been ruined. Many young men and soldiers have been rushed to an early grave.

The world cannot continue to play spectator to a situation that is resulting in thousands of deaths. Another Rwanda is silently playing out in Cameroon and the AU and EU are doing nothing to check this madness that is being encouraged by the government. The world seems to have abandoned Southern Cameroonians to their ugly fate.

Cameroon needs help. The world has to come in to stop the blood flow. The country is heading to the bottom of the abyss and if something is not done, the entire sub-region will be destabilized. Mr. Biya and government are mowing down the people of Southern Cameroons. Their only crime is that they have complained about a regime that is causing them a lot of pain.

For how long will the world continue to look the other way while the Yaoundé government reduces the size of its own population? Does one and indivisible imply that an entire region must be decimated?

By Kingsley Betek in Bamenda