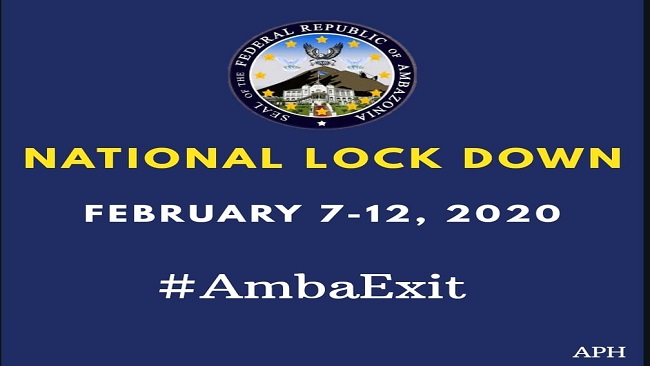 Southern Cameroons Crisis: ‘Only a new president will solve the problem’ 0

A senior government official has told the Cameroon Concord News Group Yaounde correspondent that “only a new president will solve the problem that is splitting our country and ruining our economy.”

The senior official, who elected anonymity, said things had deteriorated to a point where regime insiders are scared.

“They themselves are scared that something terribly bad could happen, especially as the economy has been caught in a downward spiral,” he said.

“We have never seen anything like this in our country. The president is totally absent while his aides are taking all the wrong decisions,” he regretted.

“This crisis has highlighted how the country’s leadership is ineffective and inefficient. What is of importance to those at the helm is just the power. They don’t care about the country. It is like their goal is to make money while the rest of the country continues to head to the bottom of the abyss,” he pointed out.

“Look at how our major cities have been transformed into ghettos. Everybody in West Cameroon is now heading to Yaoundé and Douala and the cities are too crowded. It is hard having a nice life in these cities,” he said.

“Everything is expensive. Accommodation is out of reach. Food prices have escalated and the absence of mass transit systems in the major cities has created more life-threatening issues for city dwellers in Yaounde and Douala,” he wept.

“The next president has a lot on his plate. President Biya has shown his limits. He is not up to the task, but he does not want to admit it as that will reflect negatively on him and his entourage. They are doing all they can to keep power, but things are quietly slipping through their fingers,” he stressed.

“Some members of the inner circle are simply tired covering up things. Corruption and nepotism are choking the system. The president’s men are suspicious of everybody and they only bring you closer after dehumanizing you,” he observed.

“They are scared that if disloyal people infiltrate the system, a lot will be leaked. The country is literally being run by the President’s wife through Ferdinand Ngoh Ngoh who also has his own personal and secret agenda,” he added.

“The country is in for rough times. The future is bleak. Until something natural happens, we may not get out of the dark hole in which Biya and his men have put us,” he underscored.

“The military has been bought over. It is full of people from the south. Soldiers from other regions have been reduced to playing secondary roles. Non Betis are monitored very closely and any suspicion could put the suspect in a difficult situation,” he regretted.

“The paranoia is growing by the day. The crisis in the two English-speaking regions of the country has become a money-making business for the military,” he pointed out.

“The top brass of the military and the president’s men give the impression that the only solution they have is the military solution. They are against a negotiated settlement. When things calm down, they will look for a way to fan the embers of war to prove that Amba fighters are still a destructive force that needs to be rooted out through the barrel of the gun,” he said.

“Look at what is happening in Muyuka. They have rounded up all the young men and they are now asking each of them to pay CFAF 50,000 if they must be released. What crime did they commit? Muyuka was quiet. Why did they have to create a new situation? Money is always on their minds and this is unfair,” he regretted.

“Let’s hope God talks to them. The devil seems to be in control of our leaders. They don’t believe in peace. We should pray that our next leaders should be people who are God-fearing,” he concluded.

By Soter Tarh Agbaw-Ebai with files from Rita Akana