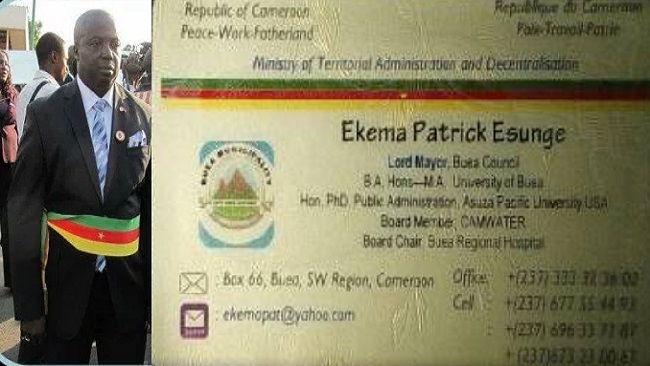 The family of the notorious former mayor of Buea, Patrick Ekema, is scared that his body might have been roasted in a wild fire that erupted on Wednessay, November 20, 2019 at the military medical facility which is part of the huge military barracks in Douala.

A source in Douala has said that there are huge concerns among government officials although some hospital sources are insinuating that the corpse has been moved to Buea.

“Ekema may never know peace. He is surely not resting in peace. It is hard to rest in peace when a huge fire is threatening to swallow you,” the source added.

The huge fire, which has devastated the sprawling medical facility, is being viewed by many observers as an inside job, because in recent times, the staff of the facility has been accused of corruption and theft.

A Cameroon Concord News Group correspondent in Douala has reported that the cause of the fire is not known, but was prompt to add that firefighters had been rushed to the military camp to fight the inferno.

However, many residents of the city fear that the fire might not be brought under in time, as Cameroon’s fire departments have the nasty habit of having fire trucks which do not have water in their tanks.

It is alleged that the fire trucks always go without water because senior military officials and their cronies use the equipment for the building of their personal homes.

The source, which elected anonymity, said multiple explosions could be heard at the facility as the fire threatened to spread to other areas of the barracks.