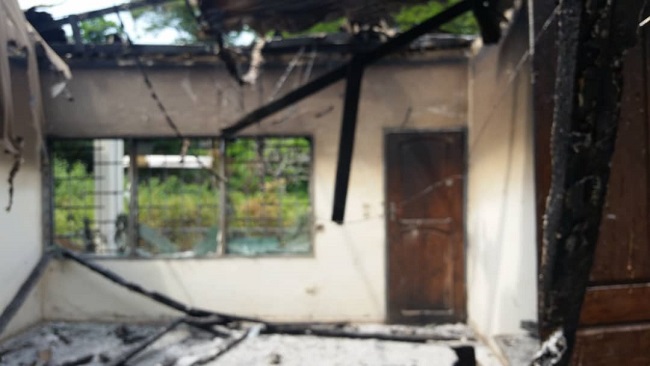 Southern Cameroons Restoration Forces have burnt down a house belonging to one of the pro Yaoundé members of parliament from the Manyu County, Enow Tanjong.

The residence, said to be located in Fotabe (Tinto) the chief settlement in the Upper Banyang sub constituency, was reportedly set ablaze on Saturday night over what the angry Southern Cameroonians called bad representation and lack of benefits of dividends of democracy in the union between French and British Southern Cameroons.

The Ambazonia Restoration Forces claimed in an audio message aired in the Kenyang language that they had earlier warned the former governor and now MP to leave French Cameroun and return home.

The veteran politician who was brought back into active politics via a diabolic harsh ploy against Hon. Rose Abunaw engineered by Minister Mengot was said to have arrived in the area accompanied by trucks loaded with Francophone gendarmes to discuss the February 2020 parliamentary elections.

Unconfirmed reports say the attack on the Tanjong’s residence resulted in a shooting with several injured. The French Cameroun gendarmerie station in Tinto is yet to confirm the incident.

Meanwhile, a source also told Cameroon Concord News that another cause of the incident was the ban on French Cameroun elections throughout Southern Cameroons by the Ambazonia Interim Government.

The Manyu County is very tense as people in the rural areas are staying indoors and might not likely partake in the municipal and parliamentary polls for fear of being arrested by the Southern Cameroons Restoration Forces.