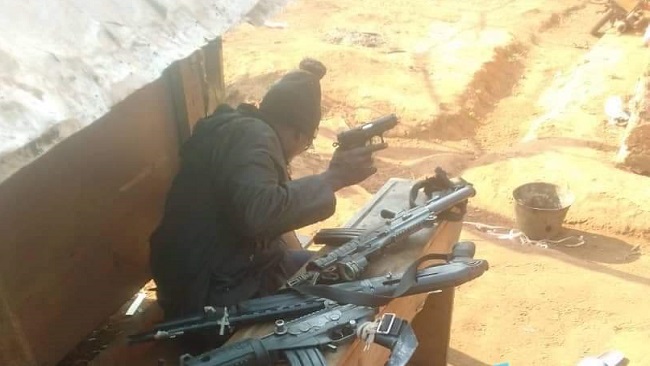 Southern Cameroonian fighters have been calling on the Diaspora to invest in Russian killing machines which will enable them to manufacture nightmares for army soldiers who have been killing innocent civilians in Southern Cameroons. These calls have not fallen on deaf ears. The dynamics are gradually changing.

After four years of crying, God seems to have answered their prayers. Russian killing machines have finally made their way into Southern Cameroons and the targets of these machines are known.

According to a Southern Cameroonian fighter who is in possession of those dangerous weapons, having that gun is like obtaining a visa to Heaven. There total jubilation in the various camps and this has boosted the morales of the fighters, he said.

“I cannot find words to express my joy. These ‘Ekelebes’ (soldiers) have been parading all over our region with their superior weapons just to intimidate us. We will now match fire with fire. Will bring them down just as they too have been bringing us down”

The fighter who met with the Cameroon Concord News Group’s correspondent in Kumba in an undisclosed location said the weapons were already in many parts of the Northwest and Southwest regions.

He added that the Mamfe jungle was providing much-needed cover and that had, indeed, helped them to transport the Russian ‘nightmare’ to many parts of Southern Cameroons.

“The weapons are confidence-inspiring. They are brand new and the boys are all elated. These are weapons that will make a huge impact once they hit their target,” the elated fighter said, adding that “we will chop down those ‘ekelebes’ like dry firewood.”

It should be recalled that Russia wants to have a strong foothold in the Central African region and its support of the Central African government against the French who want to bring back their incompetent lackey, François Bozize, to power may be the beginning of the end of French influence in the sub-region.

Russia does not only need to be influential in the sub-region. It is also seeking new market outlets and diamond. Cameroon is a huge market and if the Russians can elbow the French out of the country, they will then become the masters of the sub-region.

Besides, Southern Cameroons has huge oil deposits in the Bakassi peninsula and huge diamond fields in Ndian Division. These resources are attracting Russians whose natural resources are almost depleted because if its teeming population.

As Russia threatens to change the geopolitical equation  in the Central African region, cracks are also emerging on the wall of Cameroon’s ruling party, the CPDM also known as the crime syndicate.

Cameroon Concord News Group sources at the country’s Presidency have been reporting that there are major cracks on the ruling crime syndicate’s wall, as the ailing monarch’s health declines on a daily basis.

The country’s president, the ailing octogenarian, Paul Biya, who has misled the country for over four decades, is now slowly but surely losing his grip on power.

Over the last year, the French Ambassador to Cameroon, Christophe Guilhou, has only met with Mr. Biya with orders from the Elysée Palace.

France’s overt and heavy involvement in Cameroon’s internal affairs over the last few months has invited accusations of recolonization.

France has made no secret of its longing for political stability in Cameroon, despite the current government’s economic incompetence and human rights atrocities.

A source inside Cameroon’s presidency that elected anonymity said that “France has insisted Biya opens negotiations with the break-away Federal Republic of Ambazonia leaders in detention, but the progress is painfully slow and embarrassing, and the French are extremely disappointed that Cameroon is sliding into another Sudan”.

France is now losing patience with the intransigence of the old and ailing Yaoundé dictator, especially as Russia has clearly stated its intention to have a foothold in the Central African region and this may occur through a partnership with the insurgents in Southern Cameroons.

The Cameroon Concord News Group’s informant at the Unity Palace in Yaoundé said Mr.Biya had surrounded himself with hawks who were deceiving him that the war in Southern Cameroons could be won on the battlefield.

But France, a major supporter of the moribund Yaounde government, clearly disagrees with such baseless assertions as the reality on the ground speaks to an escalating conflict.

The Cameroon Concord News Group’s informant intimated that “those close to the physically and mentally diminished old man keep lying to him that the war can be won in the battlefield, but France disagrees. The hawks are lying to him to keep the war going as it is a lucrative business for them.”

The fast-moving geopolitical dynamics in neighboring Central African Republic, marked by huge Russian involvement, is a huge concern for France.

France has maintained a stranglehold in the Gulf of Guinea but Putin is about to put an end to that.

In the Central African Republic, President Faustin Archange Touadéra, has received some 300 military instructors from Russia to counter a surge in French-supported rebel violence ahead of Sunday’s election.

President Archange Touadéra is accusing France of seeking to oust him from power.

He also stresses that such a plan will not see the light of day as Russian support to the Central African country’s government has destroyed French plans to bring back François Bozize, a French lackey, to power.

The recent news updates that the US-based Southern Cameroons Interim Government has established diplomatic relations with Moscow is keeping Yaoundé and Paris awake at night.

Our sources opined that “The Central African Republic seems to be out of France’s grip, but the French are determined to keep Cameroon, prompting a new strategy that underscores the importance of dialogue. If Cameroon moves away from France’s orbit, then the French are out of Africa.”

The pressure from Paris is telling on Mr. Biya who is already dealing with many health issues. Our informant said that the Yaoundé old man is feeling the pressure as Christophe Guilhou is avoiding Paul Biya’s calls.

For now, the most actively important, but highly insignificant adviser to Mr. Biya is his wife and this is a colossal concern for many who hold that she lacks the intellectual and administrative capacity to handle political matters.

This is causing a split within the ruling party, though many party officials are still reluctant to publicly express their disagreement due to fear of long jail terms which await anybody who challenges the ‘monarch’ or his policies.

Very dark clouds are hovering over Cameroon. The waters are already murky but the arrival of Russians in the region makes the waters a lot murkier.

If the Biya government, which has been in power for almost four decades with nothing to show for such a long stay in power, does not change its strategy on the Southern Cameroons crisis, it will drag the country into a pretty mess that will take a long time to clean up.

Things will surely escalate in the coming year as new actors and stakeholders get thrown into the mix.

The international community must continue to mount pressure on the ailing Biya so that he can meet with the Southern Cameroonian leader, Sisiku Julius Ayuk Tabe, and his collaborators if genuine peace has to return to Cameroon.