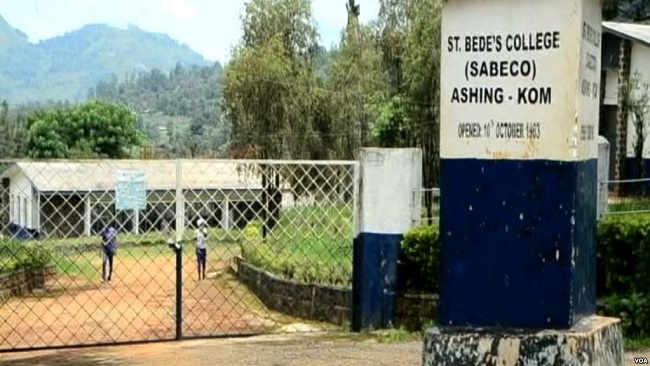 Fresh violence in northwestern Cameroon has forced hundreds of teachers and students from their classrooms. Separatist rebels are targeting schools for not observing calls to strike.

Heavy rains fall as we arrive at Saint Bedes school in the English-speaking town of Ashing.

Dozens of students are carrying boxes out of the school. 17-year-old student Ambe John is leaving.

“I am going home due to what happened in school and for the sake of my principal. I need to go home so he can be rescued,” said Ambe John.

Armed men attacked the school on Monday, abducting the principal and the school chaplain. Government officials told VOA for the two men were targeted by anglophone separatists for violating instructions to remain closed in support of the Ambazonian independence movement.

The chaplain was later released but the principal has not been found.

Godlove Nformi left his home in the nearby French-speaking town of Bafoussam to pick up his son when he got news of the attack.

“The matron gave us the information that we should come and take our children home,” he said. “I am feeling too bad because I think that with everything children should have been going to school at least to see that their future is guaranteed.”

Schools in Cameroon’s two English-speaking regions — the northwest and the southwest — were shuttered for nearly a year starting in November 2016. Teachers and lawyers were on strike demanding reforms to address what they say is the marginalization of Anglophones in mostly French-speaking country.

Some schools reopened last October, but the crisis has intensified. Late in November, President Paul Biya declared a state of war in the Anglophone regions.

The government says at least 30 schools have been attacked this year, with at least a dozen teachers either killed or wounded in the northwest and southwest regions. Hundreds more have fled.

Johnson Itoh, the most senior education official in the northwest region, says they have been pleading with the teachers to return since the government has deployed the military to protect them.

“We are having personnel of secondary education especially school heads shot at in the northwest here. The going is tough, the tough must get going. So what we are trying to do is to raise up the morale of those in the field,” said Itoh.

Adolph Deben Tchoffo, governor of the northwest region of Cameroon, has been visiting the villages to encourage parents to send children to school.

The governor says he has come on behalf of President Biya to call on the population to seal a pact of collaboration with the military and administrative authorities so that the rebels, which the government has deemed terrorists, can be defeated. He says all village heads and traditional rulers should create self-defense groups to ward off infiltration.

Since early 2017, the government has responded forcefully to the unrest in the Anglophone regions. Rights group say the crackdown, which has included the detention of hundreds of people and at one point a three-month internet blackout, inflamed tensions, making dialogue more difficult.

The conflict has killed dozens on both sides this year and displaced at least 20,000 people.