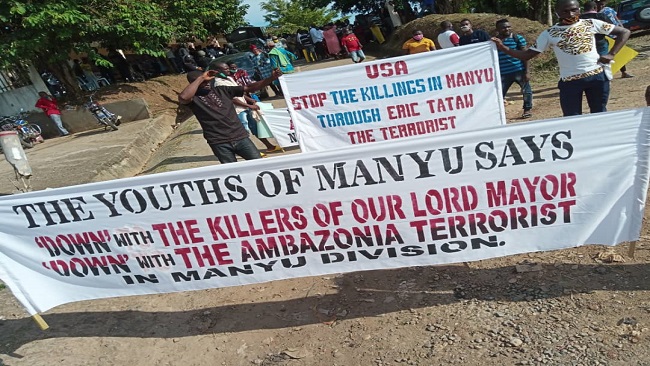 The Manyu Divisional headquarters of Mamfe is going through moments of high tension, as the population gets wind of a plan by Amba fighters to carry out mass arrests in Mamfe following a fake demonstration organized and funded by the CPDM crime syndicate.

“The tension is high and many of those who joined the government-sponsored demonstration against the killing of the mayor of Mamfe are losing sleep,” the source said.

“Many are trying to leave the town but are confused as they know that they must be checked on their way out by Amba fighters who will like to enforce the law by arresting them,” he added.

“It is like Amba fighters have surrounded the Division with an invisible ring of fire and anybody seeking to run away from Amba justice might just end up in a green jail whose conditions are far from being good,” he said.

“With Amba fighters, justice is never delayed, so it is never denied. The Amba justice system seems to be fair and effective, but the death sentences are just too many and that is why everybody is jittery as if they are standing on tenterhooks,” he stressed.

“With Amba boys, you are never too sure. Not many people have left their courts smiling. They all seem to be judges and magistrates but none of them has ever been to a law school,” our source who elected anonymity said.

“Those who participated in the demonstration have already spent the CFAF 5,000 that they were given and the fear is that if caught by Amba boys, they would be required to deliver the money,” he said.

“It is hard to come by money these days which makes CFAF 5,000 look like a huge some of money. A friend who participated in the demonstration has not slept for two days and he is frequently visiting the bathroom. He is really losing weight at a very fast rate. It is like the fear of Amba is the most effective and efficient weight loss pill. I have never seen a man lose weight that fast,” he stressed.

Some Mamfe residents are already saying that the mass arrests could result in mass killings, especially as Amba fighters have stepped up their operations in the county ever since the creation of the Manyu Liberation Council.

Currently, there are leaflets across the county, advising drivers to determine the identity of any would-be passenger before driving them out of the main town. This is to ensure that nobody, who actually participated in the demonstration, leaves the town surreptitiously.

Drivers are being warned that failure to do their due diligence will result in flogging in a public place.

The leaflet, a copy of which was sent to the Cameroon Concord News Group office, clearly reminds drivers of the need to err on the side of the law.

The leaflet warns of dire consequences if any resident of Mamfe seeks to outsmart Amba fighters who have an uncanny way of picking out their enemies.

Speaking to a senior official of Manyu Tigers, an armed group that transformed itself into a nightmare to many army soldiers, the Cameroon Concord News Group correspondent in Manyu gathered that the group had reactivated many of its cells across the county with a view to hemming in residents of the Division who have been yielding to the temptation and corruption of the ruling CPDM party.

The official stressed that for some time now, residents of the region had been losing the discipline that was required of them.

“Everybody living in our territory is required to demonstrate the best possible behavior. Over the last few months, we have been noticing behavioral lapses and I and using this opportunity to call on our citizens to return to the days when army soldiers respected every Southern Cameroonian citizen because of our discipline,” he said.

“We have learned that our women are now playing ball with the military and in the process, they are betraying our boys. I would like to remind them that the honeymoon is over. They should look at what happened to the mayor of Mamfe to understand that there are huge risks working with the military. The military is here to fight and not to have sex with our women,” he underscored.

The Manyu Tiger official also stressed that they would continue to step up their patrol in the region to ensure that people who are COVID-19-positive do not come to infect the population.

He urged the chiefs who are on the ground to help sensitize their population on the dangers of COVID-19, adding that any chief who violated the rules would face the wrath of the law.