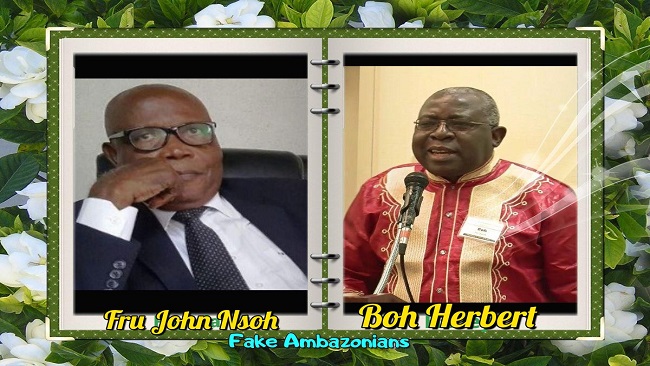 Many people thought that news of the informal meeting between the Yaoundé government and leaders of the revolution who have been in jail for almost three years would be a welcome relief to many Southern Cameroonians, but this move designed to start talks that might deliver peace to the people of Southern Cameroons does not seem to bring happiness to many of those who thought they would be at the forefront of things.

In every society, there are always people who will feel diminished when others get recognized or known and these are the people who feel that they have been rubbed up the wrong way as the Southern Cameroonian President, Sisiku Julius Ayuk Tabe, and his collaborators honored the international community’s invitation for informal talks that might pave the way for formal and comprehensive negotiations.

Mr. Ayuk Tabe and his team have demonstrated that they are still faithful to the principles that have driven the revolution from the very first day. The team has always placed the people’s interest above its own and it understands that a decision to end the fighting on the ground does not depend entirely on only those who are in jail. This explains why the team laid out some realistic conditions that the Yaoundé government must fulfill before any serious talks could take place.

The leaders believe in the total independence of Southern Cameroons and they know that they must tread carefully. Their demands included calling for a ceasefire which will require the military to go back to the barracks. This action will make it possible for Southern Cameroonians who have been traumatized for years to be psychologically liberated to go about their businesses without fear of sudden aggression.

They also called for the unconditional release of all those who have been detained and imprisoned as a result of the crisis as well as a declaration of a general amnesty for all Southern Cameroonians in the Diaspora, making it possible for them to visit their homeland without any embarrassment from the Yaoundé authorities.

The leaders also called on the Yaoundé government to participate in a genuine, open and inclusive dialogue without preconditions, with a timetable and venue, in the presence of an independent and impartial mediator acceptable to both parties.

The team was invited by the Yaoundé government that has been dragging its feet on the possibility of sincerely discussing the Southern Cameroons crisis that has put the country in the spotlight for all the wrong reasons. President Ayuk Tabe and his collaborators did not have a choice. They are captives and are at the mercy of their captors, so they must listen, but have so far demonstrated that they will always express only the views that will reflect the genuine aspirations of the people of Southern Cameroons.

Since the people’s interest is paramount, they had to honor the invitation, especially as the international community was involved and has been urging both parties to seek ways to end the fighting and address those issues that triggered the fighting.

From every indication, this approach is ideal in the minds of peace-loving Southern Cameroonians, especially those who hold and understand that no matter how long the guns keep spitting out bullets, the final decision on separation, restoration or federalism will only be made at the negotiating table where all parties are properly represented; a point Southern Cameroonian leaders in jail reiterated by calling for the unconditional release of all those who have been detained and imprisoned as a result of the crisis as well as a declaration of a general amnesty for all Southern Cameroonians in the Diaspora.

But a bunch of warmongers led by highly discredited and easily corruptible people like Mr. Chris Anu, the disgraced former Communication Secretary of the collapsed Sako Interim Government; Mr. Boh Herbert whose major concern has been how he can be in the spotlight and Lawyer John Fru Nsoh who had to escape because he could not stand the heat in Cameroon, but is courageous enough to tag President Sisiku Ayuk Tabe as a fraud. Lawyer John Fru Nsoh still has many races to run in his life and the ones he has in the USA are tough and should keep him busy. Instead of seeking to split Southern Cameroonians who have wholeheartedly invested their confidence in President Julius Ayuk Tabe, he should use his experience as a lawyer to unite Southern Cameroonians.

Their constant attacks on President Sisiku Ayuk Tabe for attending the informal talks facilitated by some ambassadors speak to their bad faith and dishonesty. Their hunger for recognition is gradually reducing them to stage buffoons. The only unfortunate thing is that Southern Cameroonians are not finding their drama funny. Southern Cameroonians need solutions to their problems and not theories from people whose only solution to the crisis is very unrealistic. There will never be any military solution to the crisis and anybody who holds that Southern Cameroons will have its way through fighting is simply deluding themselves and selling false dreams to the people on ground zero who are taking the brunt of the fighting.

Common sense will dictate that during critical moments like the one Southern Cameroonians are going through; most people will demonstrate objectivity and modesty in their analysis of the situation that has already consumed some 5,000 lives. Yes, the fighters cannot down their weapons at this time and President Ayuk Tabe has not called for that. He has simply articulated the people’s aspiration and that does qualify him for a death sentence as advocated by Mr. Boh Herbert and his band of attention seekers.

There will be a negotiation and that will be after a general amnesty would have been granted and all prisoners released. The talks will surely take place in a neutral location and when that time comes, all stakeholders in the conflict will be free to express their minds to ensure that the people of Southern Cameroons see their dream come true. For now, Mr. Boh Herbert must use his “wisdom” to understand that he is splitting Southern Cameroonians and weakening their ability to resist the dictatorship coming from Yaoundé. He should be wise enough to understand that silence could be golden in certain circumstances, especially now that unity is considered a huge asset against the Yaoundé government that is looking for ways of disuniting the people with a view to imposing its laws on them.

In Africa, it is assumed that age comes with wisdom, but Mr. Boh Herbert and Barrister John Fru Nsoh have not proven that they are wise despite the clear signs of senile decay on their faces. It is time for them to stop singing the wrong music. Southern Cameroonians are not buying what they are selling. Many are simply asking if Mr. Boh Herbert and his team are not playing for the Yaoundé government that has a history of corrupting its opponents. While they accuse President Sisiku Ayuk Tabe of corruption, they must know that that logic clearly cuts both ways. For now, the Yaoundé government is simply enjoying the fake family feud that Mr. Boh Herbert and his team have triggered just to be in the spotlight.