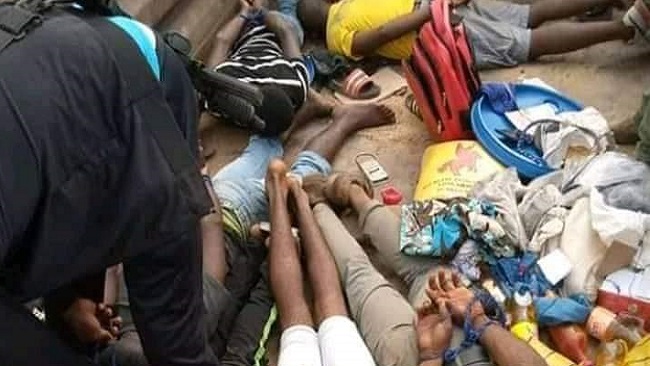 Southern Cameroons War: The streams of blood are still flowing 0

Human life appears to be worthless to both separatist fighters and government troops which have been running amok in the region and in the process, leaving a trail of death and destruction.

Over the last week, several people have been beheaded and many others kidnapped in the two English-speaking regions of the country, causing the international community to call out separatist fighters who are giving well-intentioned rebellion a very bad name.

Government troops are also putting themselves in the firing line by committing atrocities that have made them the people’s enemies instead of allies as criminal elements, some sponsored by the country’s territorial administration minister, Paul Atanga Nji,  make hay of the ongoing fighting in the two regions to enrich themselves and stifle a rebellion that started some four years ago when the country’s English-speaking minority accused the Yaoundé government of decades of injustice and marginalization.

A few days ago, a young girl was killed in the country’s northwest region shortly after a video of her dancing in a drinking spot with some young boys. She was accused of dating government soldiers and betraying the revolution.

Two days ago, a young beautiful lady was slaughtered by supposedly separatist fighters in the town of Muyuka in the country’s southwest region.

The gruesome pictures have triggered a wave of condemnation across the globe, with the US embassy in Yaoundé and an American law-maker calling for the suspects to be brought to justice and a speedy search for a resolution to the issues that triggered the fighting.

The country’s military has been dispatched to Muyuka to protect the population, but in less than a day, it has killed seven civilians, prompting many people to question if the army is better than the lawless criminals and separatist fighters who have been intimidating the local population.

The country’s law enforcement community has hastily presented some three young men as the killers of the young lady in Muyuka, causing many people to openly call out the country’s  police which is the most corrupt and most inefficient on the continent.

If the culprits have been arrested, why has the military been killing innocent civilians in Muyuka even after the arrests?

How could an inefficient police force just arrest the killers of the young lady in less than a day when the entire world knows that separatist fighters live in the jungles and not in town?

The corrupt police is also known for its brutality and many Cameroonians hold that those arrested will be compelled to confess just to give the corrupt Yaoundé regime a good name around the world.

The senseless killings speak to the breakdown of law and order in the English-speaking regions and the inability of the government to engineer peace.

The slaughtering in the two English-speaking regions which affects mostly women and children has been on the rise ever since the country’s ailing and senile President, Paul Biya, declared war on the people of Southern Cameroons.

Most of the civilian casualties that have recently occurred in Fako and Mezam Divisions are attributed to armed Southern Cameroonian groups and Yaoundé-sponsored militia battling Ambazonian Restoration Forces.

Towns such as Ekok, Muyuka, Wum, Bamenda, Ndop and Kumbo have witnessed the worst forms of brutality and the killings are now spreading to other towns in Manyu and Kupe Muanenguba Divisions, while Batibo and Widikum in the northwest regions have become open air abattoirs.

Cameroon Concord News Group recorded 62 deaths throughout Southern Cameroons in the month of July and 59 were innocent civilians.

When Cameroon government forces used machine guns in populated areas in Jakiri and Batibo, 99% of those killed were civilians and not people involved in the fighting.

The international community has to step up its pressure on the corrupt Yaoundé government and the separatists if the violence and senseless killings have to come to an end.

The solutions to the country’s problems could be found at the negotiating table, but both parties have been reluctant to heed calls for peace talks.

The Yaoundé government has, in particular, been dragging its feet, hoping that time will address its problems; an approach that has not delivered any positive results over the last four years.

The world should not continue to turn a blind eye to these atrocities committed by both parties. The Yaoundé government must be pressured into embracing talks and it must acknowledge that time for change has come.

There is no way things will continue as usual. The country’s economy is on its knees and the military is very unlikely to score a clear victory over Southern Cameroonian fighters who are more determined to elbow the Yaoundé government out of the region.

After four years of senseless fighting, tricks and killings, it is time for both parties to work towards ending the streams of blood that have been flowing in Southern Cameroons.