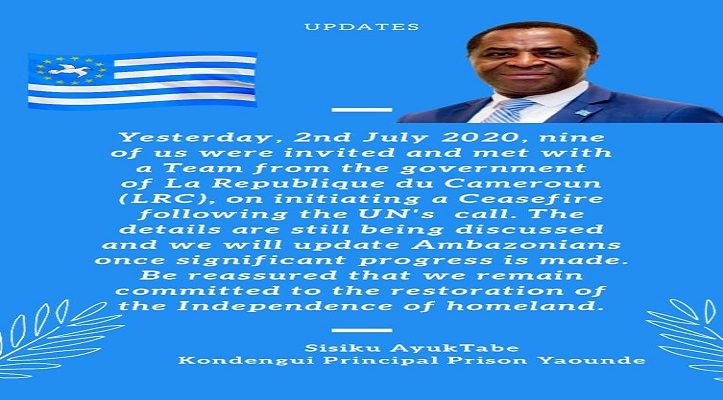 Southern Cameroons Crisis: The Talking has begun, but…. 0

As the government’s killing machines rolled into the two English-speaking regions of the country, young Southern Cameroonians scrambled for means to defend themselves. Initially, they used sticks and clubs, but over time, hunting rifles emerged and with those rifles, they frustrated Cameroon’s military.

Today, with the support of the 4-million strong Southern Cameroonian Diaspora, the fighters have purchased some of the most sophisticated weapons which have regrettably resulted in the death of many young soldiers who, in reality, do not even know why they have to fight their English-speaking compatriots who are simply and politely complaining about a system that has not met their dreams and aspirations.

Cameroon, a country once touted as an oasis of peace in a desert of chaos, has finally gone down as a country bereft of peace and stability. Over the last years, the country’s government has morphed from a liberal and budding democracy into a full-blown dictatorship, with journalists and human rights activists arrested and thrown into jail without respect for due process.

Many English-speaking journalists have lost their lives due to torture in Cameroon’s dungeons and millions of the Southern Cameroonian Diaspora members cannot go to the country of their birth because of the government’s unpopular decision to arrest and jail anybody whose name might be associated with the Southern Cameroons crisis.

In most countries around the world, the Diaspora is justifiably considered as a significant source of development finance, but in Cameroon, the government has deliberately failed to harness these resources for the general good because it wants to prove a point. But the government has only one thing to prove – that it is capable of living up to the glorious expectations of its people.

Unfortunately, it has failed and woefully too in many respects. Poverty is blighting the lives of the country’s citizenry and it is spreading like ragweed. Corruption is all over the place like a very bad rash and the country’s social and road infrastructure has collapsed like a pack of old retired cards.

Southern Cameroonians living abroad have the resources and they are capable of engineering a nightmare for the Yaounde government if it does not change its stance on many issues. Times have changed and the government must keep pace with the changing times. The tough resistance put up by the poorly organized fighters in Southern Cameroons over the last four years should inform the Yaounde government that there will never be a total military victory in that part of the country.

The fighters are determined, and the Diaspora remains focused and knows how to give the Yaounde government a run for its money. The bloodshed that was once localized to Southern Cameroons is gradually making its way to the nation’s capital. Over the last week, some three bombs have gone off in Yaounde, hurting innocent by-standers. It will not be long before massive bombs will start going off in the city’s downtown core if the arrogance that has become the hallmark of the Yaounde government is not curbed and if peace is not given a chance.

For four long years, the Yaounde government has turned a deaf ear to calls by the international community for a peaceful solution to the conflict. For four years, more than 5,000 Cameroonians have been mowed down by a government that is supposed to protect them. For four years, many young soldiers have been pushed into an early grave because of the arrogance of a government that holds that only military violence can bring peace to a country that has been running on injustice, corruption and incompetence.

The country’s president, Paul Biya, for his part, has been conducting himself as if  his compatriots do not deserve him. He has failed on many occasions to address the nation on a major challenge like the Southern Cameroons crisis that has robbed the country of billions of dollars.

Cameroonians seem to plead with their president for him to reassure them during challenging times, but Mr. Biya who has earned a reputation as an absentee president has ignored calls from world leaders for the Southern Cameroons situation to be addressed promptly and rapidly in order to reduce the bloodshed.

His leadership has left the country in a very bad political, social and economic shape. Tribalism and nepotism have become the hallmarks of his politics, with his tribesmen and women considering other Cameroonians as sub-humans.

After four years, wisdom seems to be prevailing. On July 2, 2020, the beleaguered Yaounde government finally thought it wise to discuss with the people it had tagged as terrorists. For years, the arrogance-driven government gave the impression that there was nobody to discuss with. It instead opted for tricks and corrupt practices as a way of ending the insurgency that has made the two English-speaking regions of the country ungovernable.

The ball is now rolling, and the international community is now seeing the light at the end of the tunnel, though the light might be that of an oncoming train that might wreck lots of things. The Yaounde government is noted for is double-speak and tricks. It might be too early to smile, although the news that both camps are working on the details of a possible ceasefire has been a reason for many to rejoice.

But the discussions also touched on other topics which both camps have chosen to leave under wraps. Facilitated by the Belgian, American and French ambassadors, the discussions were friendly, although the Ambazonian President, Julius Ayuk Tabe, did not miss the moment to remind the Secretary-General at the Presidency, Ferdinand Ngoh Ngoh, of the regime’s wickedness and failure to live up to the people’s expectation; the reason why Southern Cameroonians are opting out of the lopsided union that was hastily stitched together in 1972 with the blessing of John Ngu Foncha who was West Cameroon’s Prime Minister at the time.

Federalism was also on the table and all the ambassadors were in support of it. They hold that a federal system will go a long way in addressing most of the issues that have caused the conflict that has put the country in the spotlight for all the wrong reasons. But tempers are still flaring on the Ambazonian side. Federalism may not be very attractive at this time, but world-class negotiators will always advise that when involved in such an exercise, sacrifices must be made. Negotiating is like meeting the other person halfway and in this case, federalism will be that “golden halfway” that might restore peace in Southern Cameroons, the region of the country that is endowed with many natural resources.

Though the discussions are underway, there are still some concerns. Some extremists who have fallen out of favor with the people are already crying foul. Only a fool never sees negotiations as a way out of a bloody situation. An intelligent person like Mr. Ayuk Tabe, the poster boy of the revolution, understands why it is necessary to talk and even negotiate. A lot of blood has soaked the soil of Southern Cameroons. It is time to mop up the soil and make the soil fertile again.

The Cameroon Concord News Group stands with President Julius Ayuk Tabe and his colleagues in their effort to find a long-lasting solution to the Southern Cameroons crisis that has already consumed more than 5,000 Cameroonian lives. The Group calls on all well-meaning people to exercise patience as the international community helps both camps to narrow their differences. Anybody who condemns the talks that President Julius Ayuk Tabe is involved in is someone who has been ripping off the people of Southern Cameroons and such a person or persons must be ignored and disrespected.

Cameroonians like the international community are focused on bringing about peace in Cameroon and Mr. Ayuk Tabe is working with his team to obtain the best for Southern Cameroons. The talks are on, but we must keep an eye on the enemies of peace who have transformed the fighting into a money-making operation. Cameroonians must support the peace initiative and the Yaounde government must not speak from both sides of its mouth. It must respect its commitments under any agreement if it wants the guns to be silenced.

A good gesture will be releasing all political prisoners, granting a general amnesty to all those who have been involved in the conflict and reconciling with the Diaspora that is capable of turning the country’s economic fortunes around. The world is watching and there is no room for errors. This is the time for talks and not for any form of sabotage!