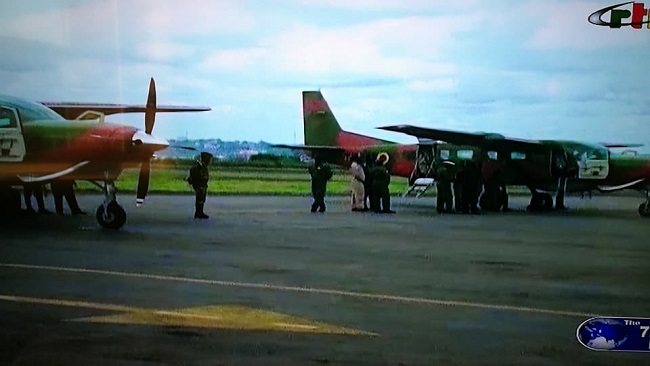 Southern Cameroons Crisis: US to cut aid to Yaounde due to alleged human rights violations 0

The US government has decided to cut millions in security and military aid to Cameroon amid growing concerns over the Cameroonian government’s human rights record, US officials tell CNN.

The officials said the US intends to “terminate” over $17 million in security aid, including funds for radars, four defender-class patrol boats, nine armored vehicles, training programs for C-130 airplanes and helicopters and the withdrawal of an offer for Cameroon to be a candidate for the State Partnership Program.

A planned US funded upgrade to a Cessna aircraft belonging to Cameroon’s elite Rapid Intervention Battalion has also been terminated. The battalion, which has been previously advised by US troops, has been accused of engaging in human rights abuses. Some of the security assistance money had been put on hold by Congress due to those concerns.

Last May, the US Ambassador to Cameroon, Peter Henry Barlerin, gave a speech that accused pro-government Cameroonian security forces of conducting “targeted killings, detentions without access to legal support, family, or the Red Cross, and burning and looting of villages.” Barlerin also accused Anglophone separatists of committing “murders of gendarmes, kidnapping of government officials, and burning of schools.”

The African nation has been beset by violence between the government, which is led by French speakers, and Anglophones who inhabit English-speaking regions of Cameroon. “We continue to urge the Cameroonian government to take all credible allegations of gross violations of human rights seriously, investigate those allegations thoroughly, hold accountable the perpetrators of such abuses, and disclose the outcome of the investigations to the people of Cameroon,” a State Department official told CNN when asked about the termination of security assistance.

“We have informed the Cameroonian government that lack of progress and clarity about actions undertaken by the government in response to credible allegations of gross violations of human rights could result in a broader suspension of US assistance,” the State Department official said, adding that the US has “been assured by the government of Cameroon at the highest levels that US security assistance will not be diverted from other than its intended purpose.”

Another State Department official emphasized that “it is in Cameroon’s interest to show greater transparency in investigating credible allegations of gross violations of human rights abuses by security forces, particularly in the Northwest, Southwest, and Far North Regions.” “The successes of the Cameroonian military — in part as a result of our training and equipment — have yielded long term and sustainable increases in Cameroon’s ability to defend its territory, its borders, and come to the aid of its neighbors, in particular northeast Nigeria and the Central African Republic,” the official said, adding that they “recognize the great cooperation we have had in the fight against Boko Haram and in restoring maritime security in the Gulf of Guinea.” “For the time being, other programs will continue. We do not take these measures lightly, but we will not shirk from reducing assistance further if evolving conditions require it,” they said.

One US official said those programs include education programs for Cameroonian officers focused on professionalization and peacekeeping as well as continuing to support “select counterterrorism and maritime security programs that have been evaluated to have low risk of diversion to the Anglophone region.” The Pentagon has already withdrawn an offer for Cameroon to participate in its State Partnership Program, a “security cooperation program” that teams US state National Guards with host nation militaries. Originally the Defense Department had intended Cameroon to partner with the Nebraska National Guard.

The US has 14 such partnerships with African countries, including Cameroon’s neighbor Nigeria. The State Department is also seeking to have an additional $10 million that was placed on hold released to fund the sustainment of certain military equipment already in Cameroon’s possession such as Cessna airplanes, mud boats for patrolling Lake Chad, and Scan Eagle Drones. The US has had hundreds of troops in Cameroon tasked with training, advising and assisting local forces in their fight against ISIS West Africa, Boko Haram and other violent extremist organizations in the Lake Chad Basin region.

US Africa Command launched an investigation last August to determine if US personnel were aware of allegations of torture of suspected terrorists being carried out by US-trained Cameroonian troops from the Rapid Intervention Battalion at a base that was also frequently used by US military advisers. The results of that investigation were not made public but a US defense official tells CNN that the investigation “found that US military forces in Cameroon were not involved in or aware of human rights violations committed by Cameroonian forces.” However, the official said the Defense Department and State Department “will assess the validity” of claims by Amnesty International that Cameroonian forces engaged in torture in a “separate investigation.”

Gen. Thomas Waldhauser, the commander of US Africa Command, is scheduled to testify Thursday before the Senate Armed Services Committee. The Trump administration recently decided to cut the number of US troops in Africa engaged in counterterrorism with the bulk of those reductions expected to take place in West Africa.