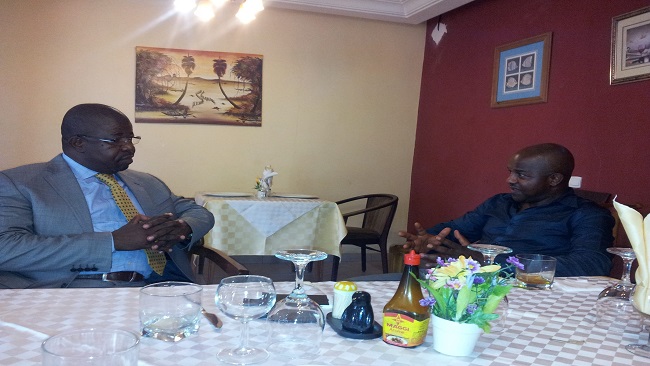 Following a Fako High Court ruling, restraining the University of Buea, UB, from revoking the Degrees awarded Buea Mayor, Patrick Ekema Esunge, the Southwest Regional Secretary of the National Commission on Human Rights and Freedoms, Christopher Tambe Tiku, (seen here with our senior political man Soter Tarh Agbaw-Ebai) has asserted to The Post newspaper that the Court erred. According to Tambe Tiku, the Court, presided over by Justice Kenneth Ako Tanyi, was misled, because, Ekema did not seek equity with clean hands. Tambe Tiku asserts that Ekema is playing for time, by seeking the court to protect him, due to the case against him for fraudulently gaining admission into UB. “How do you skip the GCE Advanced Level to go to the University,” Tambe quipped?

He (Ekema) has nothing in front of the court. He says he genuinely earned the 1st and 2nd Degrees; you cannot look at the qualification without looking at the entry requirement.” Tambe Tiku says the court erred because: “You cannot say that the University be put on notice and you go further to grant the prayers of the applicant in the ex parte motion,” Tambe Tiku holds, regarding the ruling in suit No. HCF/015/WOS/18/1M/18 of April 16, 2018. He further states that Ekema used the court to deceive the public that injustice was meted on him. Ekema’s Lawyer, had, in the ex parte motion, prayed the court for: “An Order of Interim Injunction, restraining the Respondents [UB and the State of Cameroon] jointly and severally, their servants, agents and workmen from making any public statement and or holding any meetings touching on purported revocation of, and or any interference with, the Academic Degrees awarded the Applicant by the University of Buea pending the hearing and determination of the Suit now pending between the parties before this Honourable Court.” “And for such further order or orders that this Honourable Court may deem fit and proper to make in the circumstances.” Tambe Tiku, in the following interview, explains his arguments.

The Post: How would you react to the Fako High Court ruling in the case pitting Ekema vs the University of Buea and the State of Cameroon?

Tambe Tiku: I am scandalised by the genre of the ruling granted by Justice Kenneth Ako Tanyi. He erred in several instances. Firstly, in his ruling he granted all the prayers of the applicant without giving the University and the Sate of Cameroon the opportunity to be heard.

The Post: What then is an “ex parte” motion, or a motion ex parte?

Tambe Tiku: An application is made to the court ex parte when one party is present and the other has not been informed that the court case is taking place. This can only be done in cases of emergency where there is no time to contact the other side or in cases where it is feared that the other side would do something such as leave the country or destroy evidence if they know about the court case. Additionally, an ex parte motion can be allowed by the Judge where the applicant is about to suffer prejudice if the court does not act. From the foregoing, it is important to emphasise the concept of urgency. In the case pitting Ekema Patrick Esunge vs the University of Buea and the State of Cameroon as respondents, one fails to understand how the Judge arrived or construed the concept of urgency before granting such a ruling.

The Post: You said the Judge failed in several instances. After explaining the instance of urgency, what other instances do you mean?

Tambe Tiku: In the first place, the applicant (Ekema) was never served with any decision from the Senate of the University of Buea. The Judge failed in ruling on a newspaper publication whose content had nothing with the official stand of the University of Buea. No official in the University or Senate gave his view on the purported article which the court ruled on. The court again erred in assuming jurisdiction in a matter which is purely administrative in character. The proper thing to do was to decline jurisdiction and advise the applicant to file an action at the Administrative Court. It is also disturbing to note that, nowhere in the applicant’s founding papers or exhibits, is he admitting that he has an Advanced Level pass which is the crux of the matter. It is sad to know that the Judge did not bother to take that into consideration. The applicant misled the court and the public into thinking that injustice has been done against him. It is a ruse to mislead the public into thinking that he passed the GCE Advanced Level GCE examination. The case before the court is one of declaratory order in which the applicant is praying the court in recognising his Bachelors and Masters Degree, respectively. It is again interesting to note that the applicant is not alleging that he fulfilled the entry requirement to gain a place in the University of Buea. The High Court has no jurisdiction over the University pertaining to matters of an administrative character.

The Post: Why do you think he didn’t seize but the Administrative Court?

Tambe Tiku:  The applicant is avoiding the Administrative Court because of the overwhelming evidence the University has against him. All these judicial irregularities masterminded by the applicant are intended to obstruct justice, especially with the criminal investigation hanging over his head.

The Post:But he is alleging that he was not served when the University setup a commission to establish if he had GCE Advanced Level…?

Tambe Tiku: Again, that is not true. He approached the court in bad faith knowing fully well that he was served twice in his office personally. The University has the evidence. It is common knowledge that he was being investigated by the University and the judicial police about his certificates. It was his duty to report to the University accompanied by his GCE Advanced Level to allay all doubts surrounding his certificates. That he did not do because he had nothing to show or prove. Even with the papers before the court, he has still failed to disclose to the court how he got to the University. He is merely floating and buying time. It beats one’s imagination why the applicant would sue the State of Cameroon after having earned fictitiously salaries as Category 8 (which is salary earned only by staff with Advanced Level.

The Post: Is it a crime to sue the State?

You cannot bring an ex parte motion against the State.

Tambe Tiku: That is another fatal error. The Senate is the highest authority as far as academic affairs of the University are concerned. The Senate had already thrashed the issue by virtue of the report of the commission that was put in place by the Vice Chancellor of UB. At that point, the University had already finished with its job. The Minister of Higher Education who is the supervisory authority over universities in Cameroon is the only authority to endorse the proposal of the Senate of UB. Hence the ruling of Justice Kenneth Ako Tanyi was ill-conceived and of no consequence. There is nothing to stop the Minister to revoke or not to revoke. This is true, regarding the fact that the Minister is not party to the suit before the honourable court. Once the University took the decision to propose to the Minister to revoke the degrees awarded Ekema, it became functus officio.