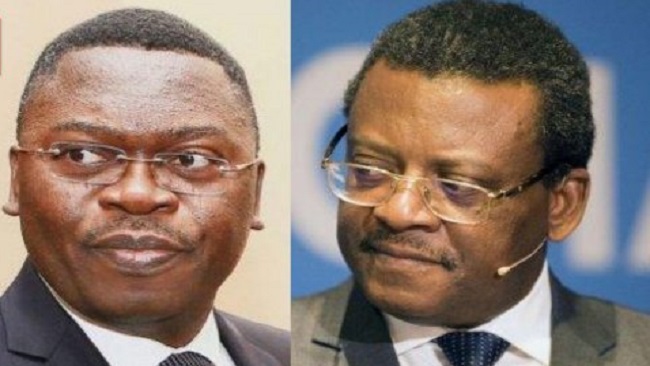 Peace talks between the Biya Francophone Beti Ewondo regime and the Southern Cameroons Interim Government have stalled due to the struggle for influence between Prime Minister Joseph Dion Ngute and the Minister- Secretary General at the Presidency of the Republic, Ferdinand Ngoh Ngoh.

On 2 July, the jailed leader of the Ambazonia Interim Government President Sisiku Ayuk Tabe announced to the world that he and his top aides had discussed a ceasefire with the French Cameroun government under the aegis of the United Nations.

By some strange happenstance, the Biya Francophone Beti Ewondo regime made a dramatic u turn and on the instructions of Ferdinand Ngoh Ngoh, the powerful Minister Secretary General at the Presidency of the Republic, Communications Minister René Emmanuel Sadi issued a press statement that the information relayed to the world by the Ambazonia leader and two Roman Catholic Bishops was not “in line with reality”.

Paris based Jeune Afrique reported recently that since then, the two warring parties have not been in contact.

According to the Roman Catholic Archbishop of Yaoundé and the Southern Cameroons Metropolitan Archbishop of Bamenda, an Ambazonian delegation led by President Sisiku Ayuk Tabe met on 2 July with Maxime Eko Eko, the head of the Francophone dominated Cameroon Secret Service at the Directorate General of External Research (DGRE).

The Ambazonians had demanded that the meeting be held on “neutral” ground. Consequently, the Roman Catholic Church was asked to provide the Episcopal Centre at Mvolyé. Located in Yaoundé, the Roman Catholic Centre was chosen to host the discussions attended by six other representatives of the Biya Francophone regime.

The Mvolyé meeting brought with it an emboldened Anglophone Prime Minister Dion Ngute who was ready to seek peace in the dialogue and an emboldened Francophone Minister Secretary General Ferdinand Ngoh Ngoh able to influence from within Etoudi.

Southern Cameroons have seen four different prime ministers in office ever since an Ambazonian, Ni John Fru Ndi attempted to take power in Yaoundé, speaking volumes about the level of political instability in a country stuck in French teleguided  status quo.

While the debate over whether the Yaoundé peace talks actually took place is seemingly closed now, the debate over the Biya regime’s ability to resolve the Southern Cameroons crisis remains open, and rightly so.

The Biya French Cameroun regime’s ability to keep Southern Cameroonians into the one and indivisible Cameroon concept is not only questioned with reference to the manner in which his Beti Ewondo political elites wormed their way into power, but also due to the fact that Mr. Biya’s government is always formed with the help of active lobbying led by former French ambassadors to Cameroon.

This has been explicitly revealed by prominence of French chief diplomats in Yaoundé. It is also a concerning issue deep inside French Cameroun and reveals the dependence of the CPDM crime syndicate on successive French governments.

The unenthusiastic welcome the Dion Ngute government received as it began its mandate should have gotten a boost if the Beti Ewondo political elites had reflected the lack of Anglophone support and backed Dion Ngute’s push to end the war in Southern Cameroons. We of the Cameroon Concord News Group can now reveal that Prime Minister Dion Ngute is leading the country in its darkest hours.

The challenges that Dion Ngute is facing are multi-faceted, starting from the fact that he has no legitimate authority over members of the cabinet he is leading. Minister Paul Atanga Nji and his partner in crime business tycoon Belinga Amougou including Ferdinand Ngoh Ngoh are making Prime Minister Dion Ngute’s mission very challenging or nearly impossible.

French Cameroun is also facing pernicious political polarisation. Correspondingly, the Biya Francophone government has little or no idea on how to navigate such an extreme political environment in order to ensure full functionality of institutions. Africa may be witnessing another Rwanda soonest.