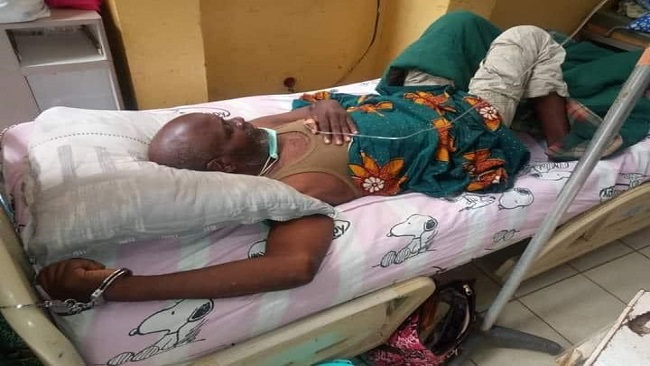 Thomas Tangem is a Southern Cameroons prisoner of conscience held by the Biya Francophone Beti Ewondo regime in Yaoundé. He was recently handcuffed on a hospital bed at the Central Hospital in Yaoundé following directives from the superintendent of the Central Prison in Kondengui, Hamadou Modi despite him being seriously ill.

The extremely vulnerable Southern Cameroons citizen was handcuffed to a prison officer and transported in an old dusty prison van to the Central Hospital and later handcuffed on a hospital bed. Thomas Tangem was taken to hospital three times lately after he woke breathless, unable to move and without any feeling down the right side of his body.

Thomas Tangem is a prisoner of conscience and a member of the Southern Cameroons group of activists arrested by the Biya Francophone government for their role in peaceful protests four years ago.

The Ambazonia Interim Government collected testimony regarding his arbitrary arrest and torture late last year and despite the intervention of a legal defense team, the Cameroon government judiciary authorities have refused to release him.

Thomas Tangem is going through unimaginable torture and his medical conditions have deteriorated considerably as a result of his incarceration. Yaoundé prison and hospital authorities have denied him everything including physiotherapy and surgery.  He is currently being held in solitary confinement in a windowless room in Central Hospital.

We of the Cameroon Concord News Group remind the Biya Francophone government of its obligations under the International Covenant on Civil and Political Rights (ICCPR) and we call on the Yaounde authorities to release Thomas Tangem and all prisoners of conscience in French Cameroun jails and detention centers.

We further call on the international community, and in particular EU member states and the United States, to demand the release of the Southern Cameroons leader President Sisiku Ayuk Tabe and all Ambazonia detainees.