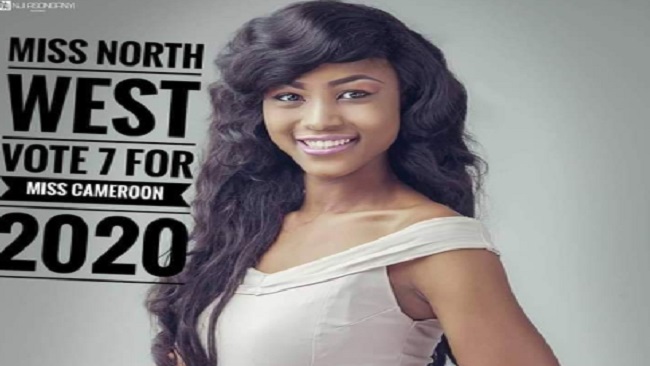 French Cameroun political elites have reportedly started the process of granting the so-called Special Status to the people of Southern Cameroons as Miss North West, Audrey Nabila Monkam was allowed to win the prestigious Miss Cameroun 2020 crown on Saturday.

The Miss Cameroun contest has been a French Cameroun private preserve ever since it was instituted decades ago and remained one area where Southern Cameroonians complaint of marginalization.  The language and modus operandi of the beauty contest has always been French and never reflected the bilingual nature of the country.

Audrey Nabila Monkam’s victory was announced shortly after midnight on Saturday evening during the final of the Miss Cameroon 2020 national competition, contested by 20 young women.

The 24-year-old, 1.80m tall who took over the beauty crown from Caroline Nseke is a business law student who impressed the jury and the audience with her physical and intellectual attributes in the various outfits displayed during the auditioning. Holder of a degree in banking and finance, she is seen by her admirers as a genuine intellectual.

Monkam hails from the Northern Zone of Southern Cameroons ravaged by the war declared by the Biya Francophone regime against the people of Ambazonia.

It is worth mentioning that in recent years, controversies have surrounded every Miss Cameroon contest. Some media houses have even accused Ingrid Solange Amougou, promoter of the Miss Cameroon Show of encouraging unhealthy rivalry among Cameroonian beauty queens.

The Biya regime had even attempted to take the lead in organizing the contest to end the repeated scandals that tarnished the show’s image, before backing off under some form of international pressure.