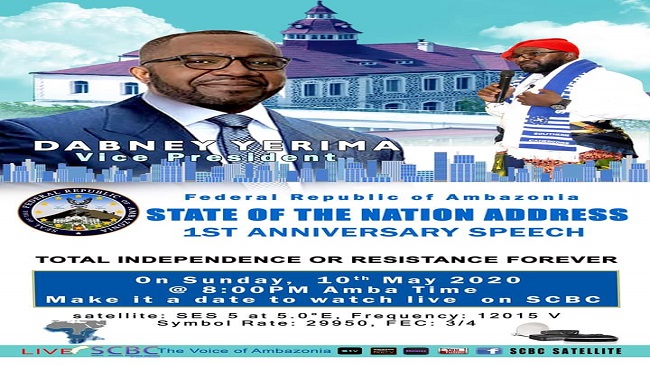 Ambazonia Vice President, Dabney Yerima will be delivering his first anniversary speech later today at 8pm Amba on SCBC TV. It was 12 months ago when President Ayuk Tabe appointed the veteran Southern Cameroons freedom and independence campaigner as his assistant with the responsibility of steadying a sinking revolutionary boat.

In the speech, Vice President Yerima will set his vision for the Federal Republic of Ambzonia for the next twelve months. Mr. Dabney Yerima will focus on six critical sectors: Education, Defense, Diplomacy, Humanitarian, Finance and Communication.

He will say “Over the last twelve months, we worked meticulously to develop a framework of collaboration between the IG, the Consortium and AGovC across Ambazonia”. On education, the Ambazonian freedom fighter will say “Our children are the future of the country we are fighting for” and “My appreciation goes to those who have continued to provide education to our children both online and in community schools in the liberated areas of Ambazonia.”

On the diplomatic front, the freedom fighter will highlight his administration’s role in the passing US Senate house resolution 358 last year and their involvement with the Switzerland parliament to get Paul Biya of Cameroon indicted for war crimes. On defense, he is expected to announce the trial of a stipends/reward scheme in certain counties for restoration forces.

The exiled leader will sound a defiant note to the international community and a hopeful position to Southern Cameroonians with “all Ambazonians living at this moment have an incredible historical burden. In our hands lies the possibility for our people to break free once and for all, from oppression to a new dawn of freedom and independence.”

Cameroon Concord News Group believes Yerima’s vision for the next 12 months is bold but achievable and we implore all Ambazonians to follow his outing tonight and join Vice President Dabney to realize the Amabzonian dream.