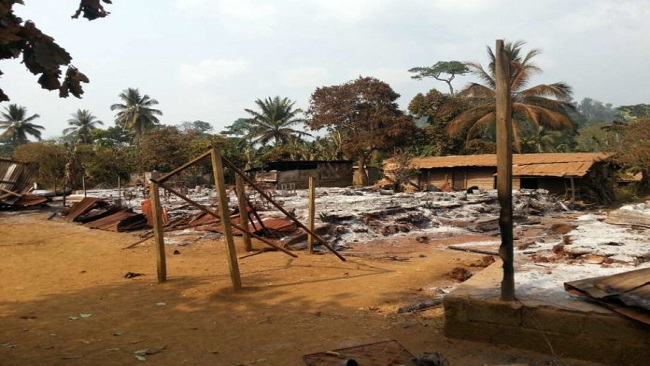 Southern Cameroons villages have been transformed into battle fields 0

The critical situation of the English regions of Cameroon is worse than ever. The violence has brought the country into a civil war in the South Western region as reported by Lilian Neg, Africa Correspondent for NewsVoice. Other sources tell NewsVoice young men flee the anglophone regions since the army capture and abduct them. If they do not flee they will ”disappear”.

The declaration of war made by President Paul Biya on November 30th 2017 to the people considered as enemies of the Republic has not been a means of peace and stability, instead the battle between Cameroonian armed forces and the various separatists groups is building up.

Villages have been transformed into battle fields where exchanges of weapons are frequent. Population are forced to leave their homes for unknown destinations. Some villages have been totally destroyed by flames, torched by the army.

People are running to the bushes in fear of being killed. Villagers are captured and heavily sanctioned while others are simply murdered. Huge number of refugees is one consequence, some 40,000 are registered in neighbouring Nigeria. Other sources report lower estimates but the figures continues to increase daily. Casualties are recorded on both sides and among unarmed civilians.

Separatists groups have been formed fighting a civil war

Recently, the vehicle of the South West region Governor Okalia Bilai was attacked by unidentified men on his way to Lebialem for the installation of the newly appointed subdivisional officer of the area.

In less than one year separatists groups have been created in various locations across the two English regions. The groups act unpredictable and they are a real preoccupation for the Cameroonian army.

These various separatists movements are kidnapping government authorities. It has been the case of the social affair delegate of the North West region who was kidnapped and has not yet been released.

They said, they are putting pressure on the Government to liberate their leader Sisiku Ayuk Tabe who was captured in january 2018 in Nera Hotel Nigeria alongside with 47 members of the newly created Nation Declare on 1st October 2017.

In spite of what is demanded by the human rights organizations and some majors institutions as well as other countries, efforts are merely regarded as radicalized opinions across these regions.

Cameroon needs to define itself as a diverse Nation

People want the government to call for a sincere dialogue.